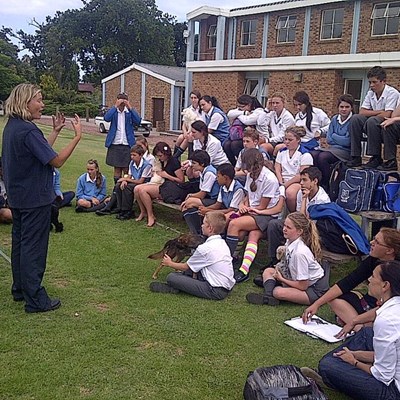 Cadets-in-training. Lesley Welgemoed takes the would-be Cadets from York High through the laws that animal owners need to heed.
GEORGE NEWS - "Those who know better, do better."

These were the words on the giant screen where a series of slides of the SPCA Cadets-in-training had just appeared. It was the first assembly of the new school term on Monday and 34 members of the York High Animal Club were receiving certificates and badges in recognition of their commitment to promoting the better care of animals.

During the previous term, the pupils had met on a weekly basis to learn about every aspect of pet care in order to go on to be better animal owners and to inspire others – mainly in underprivileged areas – to do the same. In a programme developed by the Garden Route SPCA Education Unit, Lesley Welgemoed and Vanessa Lucas had covered heart-breaking topics, such as why there is animal cruelty and what constitutes cruelty, through to practical issues such as combating mange, the danger of worms, ticks and fleas and why pet sterilisation is so crucial.

The Cadets-in-training participated in practical sessions such as dog grooming, giving vaccinations (to a lemon) and they even watched a sterilisation procedure.

Encouraged by the master-minds behind the York High Animal Club, teachers Hayley Kayser and Gillian Lee, the pupils were also active in collecting R10 000 for World Spay Day, thereby enabling the SPCA to sterilise another 50 dogs and cats whose owners simply could not otherwise afford do so.

When the Oudtshoorn horse rescue took place, the Cadet trainees threw themselves into helping the SPCA to feed, groom and comfort the horses.

In congratulating his students, a very supportive Principal Francois Moll commended the Garden Route SPCA for this initiative.
The newly qualified Cadets have already identified a school where they will begin to interact with young learners in order to spread their compassion and knowledge.

A second SPCA Cadets course will be run in the third term for more students wishing to participate.