Weekend of flames in Garden Route 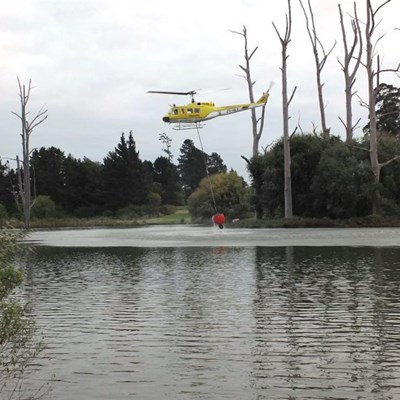 A Huey helicopter scoops water from a dam at George Golf Club to help combat the fire in Witfontein on Monday. Photo: Christine Ridge-Schnaufer
GEORGE NEWS - An elderly farmer fought for hours to keep a sea of flames from devouring his farmhouse in Leeukloof, north of Mossel Bay as raging veld fires had all fire teams in the district running on high alert during the past weekend.
Strong berg winds, high temperatures and a lack of resources created a lot of drama as fires broke out in the vicinity of Mossel Bay, George and Herold. Firefighters of Eden District Municipality, George, Mossel Bay, Working on Fire (ground and air support) as well as private institutions like MTO Forestry, Cape Nature and private landowners (farmers) stretched their limits trying to contain these fires.
Leo Schultz (72) managed to save the farmhouse he occupies in Leeukloof by using a water pump and trailer filled with water cans to keep the area around the property wet. He pulled the trailer behind his Land Rover, covering a circle around his house and shed.
Despite his efforts, the fire gutted a second house as well as a shed on the farm. "At some stage Schultz was surrounded by fire and he literally had to keep on spraying water for nearly five hours. He is the lion of Leeukloof, " said a farm owner.
The George Fire Brigade extinguished 44 grass, veld and bush fires in Herold, the Montagu Pass and the Cape Pine plantation behind the Hawthorndene Hotel. The fire in the vicinity of Herold was still active on Tuesday afternoon, but under control.
Another fire on Tuesday morning destroyed seven shacks in the George residential area of Conville. According to Rudy Lewis, chairperson of the Conville Neighbourhood Watch, no one was injured. The affected families were provided with emergency housing by George Municipality.
The Eden Fire and Rescue Service assisted, among others, with a fire in Friemersheim. "This fire allegedly originated from a lightning strike that occurred south of the 'Engelse berg' about two weeks week ago," said Eden Head of Disaster Management, Gerhard Otto.
"The high day temperatures, as well as berg wind conditions over the past weekend caused the fire to reignite and about 4 600ha was razed by fire from Friday 28 April to Sunday 30 April. Included in the area that was burnt is the MTO Pinegrove plantation of about 650ha."
Cooler weather and less windy conditions helped teams to bring this fire under control on Sunday night. On Monday about 137 people were deployed to assist with mainly mopping up and attending to some flare-ups which occurred at the head of the fire in Van Niekerkskloof. These operations continued on Tuesday with approximately 107 personnel from various institutions and local farmers.
The cause of the fire in the Witfontein Nature Reserve behind the Hawthorndene Hotel on Monday is still being investigated. "Fortunately the rapid deployment of the Huey helicopter, on standby at the George airport, saved the day with this fire brought under control within an hour after being reported," said Otto.
The fire in Herold was reported about a month ago. According to Otto it reignited over the weekend and jumped the Montagu Pass on Monday.
The Eden Fire and rescue teams did not respond to this fire as all their resources were already committed. The George Fire Brigade brought the fire under control on Monday night.
On Saturday 29 April a fire broke out on the southern side of George, and was brought under control by the George Fire Brigade.
Click here for a photo gallery.
A farmhouse that burned down on a farm in Leeukloof, a rural area north of Mossel Bay. Leo Schultz (72) managed to save another house on this farm, which he occupies. Photo: Peter Moolman
The cause of the fire in the Witfontein Nature Reserve (behind the Hawthorndene Hotel) on Monday is still being investigated. Photo: Christine Ridge-Schnaufer
Click here for previous articles: