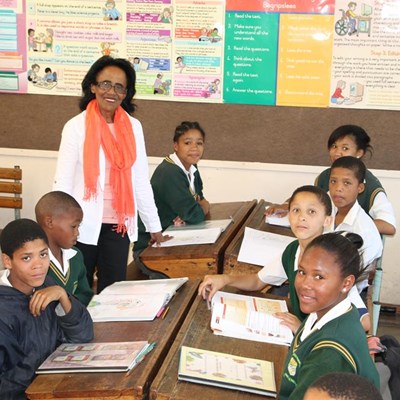 To be eligible for this prestigious award the nominee has to have a minimum of 30 years continuous service in a public school. The national award winner will be announced before the end of January 2015.

Visagie will retire in January after 44 glorious years of teaching; 26 of them at Heidedal. "My grandson, M'Shaé Fisher, bought my dress that I wore to the gala evening. Before I left he said I looked like a princess and I would return a queen. I never gave it a second thought and was very relaxed as I thought I had a one in a million chance of progressing past the Eden District round until my name was called and my feet felt like jelly. I am totally and utterly humbled."

Born in Koffiefontein in the Free State, the eldest of 10 children, her father was a school principal who moved around resulting in her attending many primary schools. She finished Grade 10 at Carlton van Heerden High School in Upington and then studied teaching at St Augustine Teachers Training College in Parow. Her final year was at Hewitt College in Crawford, Cape Town, where she specialised in physical education.

She returned to her old school in Upington where she taught PE from 1970 until 1975. In 1973 she married her husband, John, who was a librarian working for the Cape Provincial Administration. He drove one of the mobile library units that crisscrossed the length and breadth of the Northern Cape and Namaqualand.

In 1976 they settled in Cape Town and she taught at Winsley Primary in Bellville South and then at Portland Primary in the newly established Mitchell's Plain. She came to George in 1988 and joined the staff of Heidedal.

Asked what the most memorable moment of her career was, Visagie said, "In 1993 I had a drunken mother locked up in the police cells for the entire weekend for severe child neglect and abuse of her two children. The Monday morning I went to her cell with the police and told her, her fortune. She never drank again and we formed a bond that still stands today after 20 years."

Past pupils say that they will always remember Miss Visagie for her favourite saying, "eagle chicks don't pick off the ground – you fly."

8 %
No, I enjoy feeling productive


I'm a 27 year old woman looking to meet men and women between the ages of 27 and 39.
View Profile