Swallowed by a hole

According to the statement, both Grimes and his son managed to escape the sinking vehicle and swim to safety, and appear to have no serious bodily injuries.

A drive down a street in Denvar Park turned into a living nightmare for Henry Grimes and his nine-year-old son when the tarred surface in Heriot Drive suddenly gave way and their Toyota Fortuner sank in a massive hole full of water.

GEORGE NEWS - A drive down a street in Denvar Park turned into a living nightmare for Henry Grimes and his nine-year-old son when the tar surface in Heriot Drive suddenly gave way and their Toyota Fortuner sank into a massive watery sink hole.

"It was the most horrible experience. It's something we won't ever forget," he said earlier this week when asked to retell the event of last Saturday morning. "My son and I are both traumatised."

Earlier the same day, prior to the incident, a main water pipe had burst and flooded the street. The area was blocked off with orange traffic cones after the first report of the pipe-burst. It is unclear exactly what happened during the accident.

A media statement by his attorney says that Grimes "did not relocate any traffic cones nor did he ignore any warning signs".

According to the statement, both Grimes and his son managed to escape the sinking vehicle and swim to safety, and appear to have no serious bodily injuries.

Grimes said he does not wish to further comment on their ordeal, but did indicate that his recollection of the events doesn't match the information that was made available to the public.

"It was not just a matter of 'we got safely out of the car'. Our car was under water and we had to get out. It was a nightmare." He said he is considering his options and is currently seeking legal advice. "I do not feel our safety was protected," said Grimes.

The Toyota Fortuner was submerged in a sink hole in Heriot Drive.

Pipe bursts
The whole eastern side of George, from Twee Rivieren in Denneoord right through to Thembalethu, Kraaibosch and Wilderness were left without water or with very low water pressure on Sunday.

Teams worked around the clock to repair the damaged pipes (of which some parts needed to be ordered) while dealing with heavy rains on site - an added pressure to an already stressful situation.

Acting Director of Civil Engineering Lionel Daniels said two pipes were damaged - one was the bulk raw water pipeline from the Garden Route Dam to the main water treatment works, which meant that water could not be pumped into the storage dams. The second damaged pipe was the bulk eastern drinking water pipe located next to the raw water pipe. Water reservoirs right through the city were affected.

"The areas worst affected were those that depend on the supply from the eastern main water pipeline. Other areas were also affected, but feed from an alternative pipeline system was able to supply water at low pressure," said Daniels. 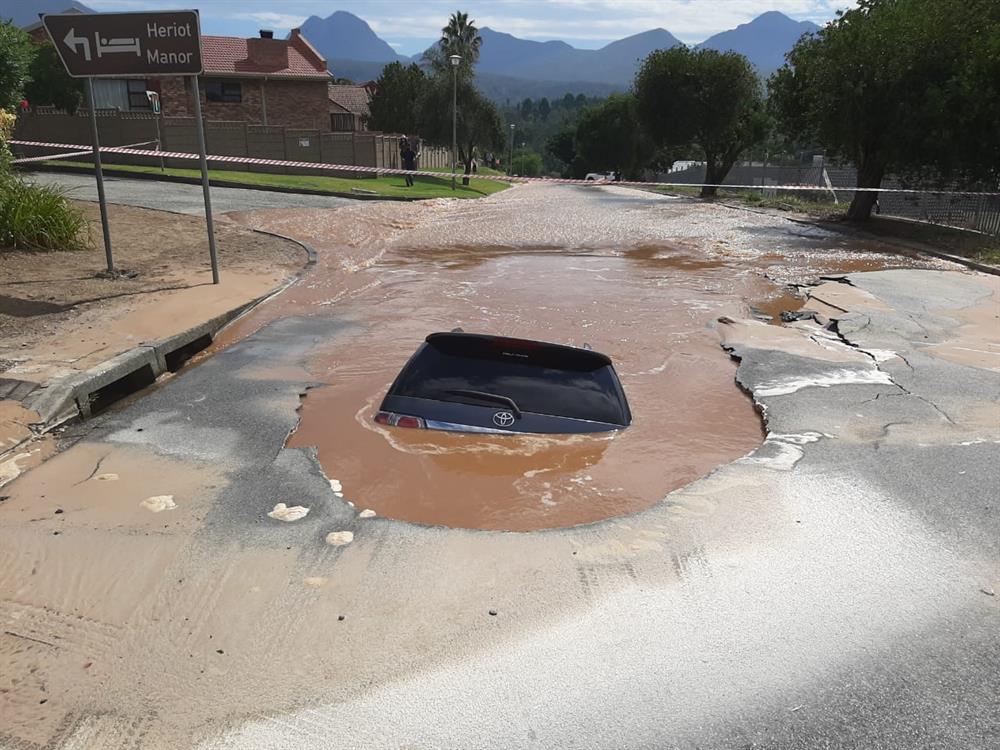 The Toyota Fortuner was submerged in a sink hole in Heriot Drive.

Safety and sink holes
There can be several reasons why the pipe burst occurred, such as the age of the pipe, pressure in the pipe or bad spots on the pipe. Daniels said it is difficult to give a definite reason at the moment.

Some residents whose properties are close to the sink hole, are worried that they might be affected. Daniels said at present the damage appears to be limited to the immediate area where the pipe bursts occurred.

"The surrounding area is regularly monitored for any abnormal signs or phenomena that can be attributed to water damage due to the pipe bursts."

Asked about the time span in which a sink hole can form when a pipe burst occurs, Daniel said in a case like this, it could be very fast, because there are bulk pipelines (600mm and 800mm diameter) involved. A most unlikely find. The hole was caused by a pipe burst earlier that day.