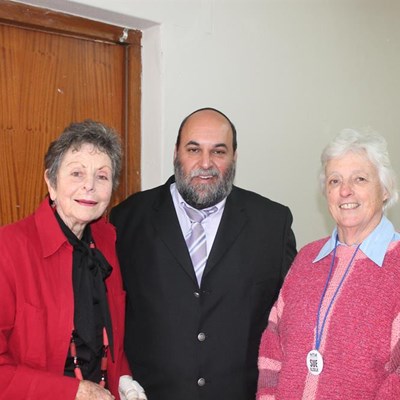 Standing with Rabbi Silberhaft is Karen Marshall, from Wilderness, who introduced him to the meeting, and Sue Rijsdijk, chairman of the U3A in George.
GEORGE NEWS - Last Wednesday Rabbi Moshe Silberhaft, a spiritual leader from the South African Je-wish Country Communities, addressed the University of the Third Age's general meeting at Emmaüs in George.

Silberhaft explained the significance of certain Jewish religious holidays and some of the dietary laws.

He further touched on aspects of his work in light of the dwindling numbers of Jews in the hinterland of the country. The audience was amazed to hear that during the 1950s and 1960s there were 25 significant Jewish communities in the Free State alone excluding Bloemfontein.

"My department attends to over 45 000 graves, many in towns where the Jewish presence today is only a memory."