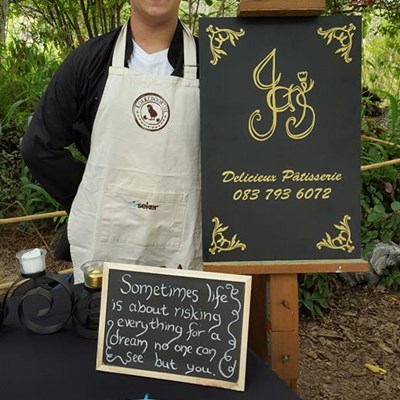 Ian Grobler (13) is competing in kykNET's Kokkedoortjie Season 1 starting on 5 April. Last Friday he sold fudge at the Getafix Garden Café Entrepreneur's Night Market.
GEORGE NEWS - A Grade 8 Outeniqua High School learner, Ian Grobler (13), is one of the top 10 competitors participating in kykNET's Kokkedoortjie Season 1, which will start screening on DStv Channel 144 on 5 April at 20:00.
It's no surprise that Ian made the finals of the popular cooking competition, as he was barely out of nappies, when all he wanted to do was cook and bake.
For his fifth birthday, the budding culinary expert insisted on a Kenwood Chef food processor as a birthday present. And luckily his parents were wise enough to adhere to his request.
Ian learnt the art of cooking from his mother, Elzet Grobler, his grannies Elsabé Jordaan and Annemarie Grobler as well as his aunt Jeanine Allen, who also shared some of her cooking secrets with him.
And the ambitious boy has been anything but idle. To achieve his dream of becoming a pastry chef and owning his own patisserie, he completed an advanced course in 2016, the prestigious Cake Decorating Diploma under Chef Annemarie Ferreira.
He is now doing his second year in cake decorating under Chef Annemarie, following the same curriculum as the course offered at the Francois Ferreira Culinary Academy.
His mother accompanied him during the filming of the cooking competition last year when Ian was in Grade 7 and she is also to be seen in the series. Naturally they are keeping mum about how Ian fared, as the winner will only be revealed in the 13th episode of Kokkedoortjie. The two judges are chef Nic van Wyk of Kokkedoor fame and Mari-Louis Guy of Koekedoor.
Entrepreneur
Last weekend he had a fudge table at the Getafix Garden Café Entrepreneur's Night Market. It is his first step to achieve his dream of converting his passion for baking and food into making money and becoming a fully fledged entrepreneur.
He plans to expand his fudge table to include cakes, quiches and delicatessen. On Friday he sold five different fudge flavours including Turkish Delight and Rose Honey. Absolutely delicious!
Getafix Garden Café sponsored his stall and Ian scored by not having to pay the usual R150 stall fee.
Click here for a previous news flash: Local young chef in kynNET's Kokkedoortjie
ARTICLE: PAULINE LOURENS, GEORGE HERALD JOURNALIST
'We bring you the latest George, Garden Route news'