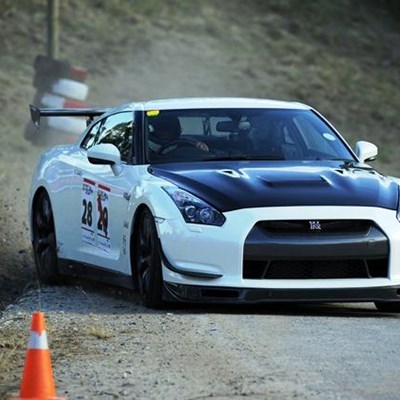 A Nissan GTR during a previous Hillclimb.
SOUTHERN CAPE  NEWS - South Africa’s most spectacular and highly anticipated annual motorsport extravaganza is about to become a reality once again when the 2017 Jaguar Simola Hillclimb kicks into gear from May 5 to 7.
Year-long preparations by the organising team have guaranteed the most exceptional line-up to date, guaranteeing the Jaguar Simola Hillclimb’s status as the premier event on the local motorsport calendar.
After scrutineering and documentation on Thursday, May 4, the on-track action gets under way the next day with Classic Car Friday, featuring 64 entries spanning a total of 58 years of motoring and motor racing pedigree – along with some of the most iconic names in the automotive business.
King of the Hill takes place on Saturday and Sunday, with the 84-car entry list comprising everything from purpose-built Hillclimb monsters with up to 1500hp (over 1 100kW) on tap to specialised lightweight single-seater race cars, exotic supercars and stunning road cars. The action will be dialled into the red this year as there are three King of the Hill titles and Jody trophies up for grabs across the various categories.
Aside from the cars, fans will be treated to some of South Africa’s most famous drivers gracing this year’s event, along with a strong contingent of international competitors from Inde Motorsports Ranch in the US as one of the many highlights.
Along with the action unfolding on the challenging 1.9km Hillclimb course, there’s a dazzling array of other activities and attractions to keep the whole family entertained. Included in the programme are town parades and exhibitions, the wide array of stalls and displays in Gasoline Alley, helicopter flips from the Simola Golf and Country Estate, the mouth-watering range of food and beverages on offer, and so much more. This truly is a spectacular all-encompassing social and lifestyle event that simply should not be missed.
Grand marshal Tony Martin

The concept of grand marshal was introduced at last year’s event for the first time, with multiple SA champion Ian Scheckter being honoured with this ceremonial role to officiate the start of the event.
For 2017, one of Scheckter’s formidable racing compatriots, Tony Martin, will be waving the Classic Car Friday and King of the Hill competitors on their way.
Martin is probably best known for his success at the 1984 Daytona 24 Hour race as part of the all-South African team alongside Sarel van der Merwe and Graham Duxbury. The trio dominated this legendary event in the famous Kreepy Krauly March 83G-Porsche.
Competing against the likes of Scheckter and Dave Charlton, Martin also raced in the fabled Formula Atlantic series, winning the SA Motor Racing Drivers Championship title in 1980 – and finishing on the podium in the overall results from 1977 to 1983.
More recently, Martin established Durban-based Backdraft Racing in 2002, which is one of the world’s top producers of AC Cobra replicas, most of which are exported to the US, while several are developed into high-performance racing cars for local customers. He still competes in historic racing, both locally and internationally, with adrenaline still clearly coursing through his veins.
Having already attended several Jaguar Simola Hillclimbs, Martin is delighted to be officially involved this year. “I feel quite privileged and honoured to be invited to fulfil the role of grand marshal,” he says. “I’ve been very fortunate during my career, and I am blessed with a very full life doing what I enjoy, participating and being involved in motorsport.
“The Jaguar Simola Hillclimb is a specially exciting event, where you see the most spectacular gathering of cars and drivers in one place. You simply don’t find this elsewhere in South Africa,” Martin adds. “I know just about everybody there and it’s a fantastic weekend which I am really looking forward to once again.”
Shuttle service
The popular Hillclimb shuttle service will operate on all three days of the event at a cost of R25 per return ride. Taxis will be leaving and returning from the playing fields of the Knysna High School where safe and secure parking is provided, starting at 08:00 on the Friday, and 07:30 on the Saturday and Sunday.
At the event venue, passengers will be dropped off and picked up either at the main Knysna Mara gate entrance, which is the main spectator parking area for those who wish to drive themselves, or the Pit Lane gate entrance.
Shuttles will also ferry spectators who don’t want to walk up the course from the Pit Entrance to the Mara Entrance throughout the event.
The VIP shuttle service for those with Le Mans VIP tickets runs from the Knysna Angling Club.
Golden tickets

A handful of lucky visitors to the 2017 Jaguar Simola Hillclimb will win an experience of a lifetime, with an exhilarating ride in a Jaguar up the Hillclimb course.
All tickets purchased via iTickets will qualify for the daily draws, with the winners contacted by cellphone and invited to the pit lane for this exclusive adrenaline-charged ride, seated alongside one of Jaguar’s advanced drivers.
Be sure to secure your day, weekend and pit access tickets online at iTickets, and stand a chance of winning a Golden Ticket to a ride of a lifetime.
Click here for more Hillclimb news.
Le Mans VIP parking & shuttle map.
'We bring you the latest Garden Route, Klein Karoo news'