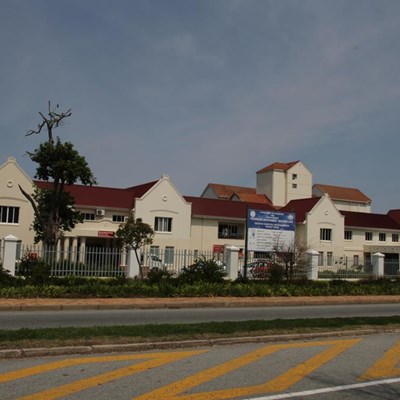 The George Hospital. Photo: Hugo Redelinghuys.
GEORGE NEWS - The George Herald earlier this year reported that the fundraising efforts of Georgian Blyth Thompson for the George Hospital Trust Fund started to bear fruit after a tremendous donation of R1-million was pledged by world-famous heart surgeon, Prof Robert Frater and his wife Elaine.
This was the first of a whopping R90-million needed to build new paediatric and neonatal wards. However, the payment had to be held back because Section 18A approval, which would enable the trust to issue tax exemption certificates to all donors, was not in place yet.
Recently Thompson was delighted to announce the approval was granted by the South African Revenue Service (SARS) on Wednesday 25 May, and now at last the donation by the Fraters can be credited to the George Hospital Trust.
"It was only after much correspondence over a period of months and a personal visit that permission was finally granted. The fundraising now begins in earnest. With God's help we will get there," said Thompson.
The trust
It was established to raise money for the new wards and Thompson, who served on the hospital board, was appointed as fundraiser. He requested that the plans for the project be completed, including plans for the decanting of patients, and that it all be professionally costed before approaching possible donors.
The trust was then formed and four trustees appointed - Rev Michiel Burger (the then chairperson of the hospital board), Dr Willie Cilliers (Chairperson: George Business Chamber), Michael Vonk (CEO: George Hospital) and Brenda Vorster (CEO: George Airport). According to Thompson, the trust, drawn up by Millers Attorneys as a contribution to the hospital, had to be accepted by government before they could apply to SARS for Section 18A approval.
Money tree
The target of the trust fund is R90-million and our readers will be kept informed regarding the progress of the effort illustrated by 'money trees'. Trees are symbolic of growth and the trust fund will be the 'nourishment' that will enable it to sprout leaves.
Each green, leafy tree will represent R1-million. As the money 'grows' on each tree, it will become increasingly leafy and we will follow the tree's progress with updates as each R100 000 mini-target is reached - represented by an increase of an extra 10% leaves on the tree. 90 Budding trees will mean the target has been reached.
Residents, business and institutions are asked to contribute to the fund. See the money tree advertisement alongside for the banking details.
Cramped wards
According to Vonk the neonatal unit continues to remain under immense service pressure. "Over the past two months the average bed occupancy in the neonatal special care and neonatal intensive care units (ICU) has been 149% and 109% respectively.
Despite the best efforts of the staff, the overcrowding leads to increased risk of infections, which these tiny neonates, sometimes weighing as little as only 700g, struggle to fight off. The expanded neonatal unit will help tremendously in providing optimal care for these tiny babies."
For more information, contact Blyth Thompson at 083 288 7288.
Blyth Thompson's fundraising effort for the George Hospital Trust Fund is gathering steam since SARS issued the fund a Section 18A certificate.
ARTICLE: ALIDA DE BEER, GEORGE HERALD JOURNALIST
'We bring you the latest George, Garden Route news'