Former Mayor not in ANC fold 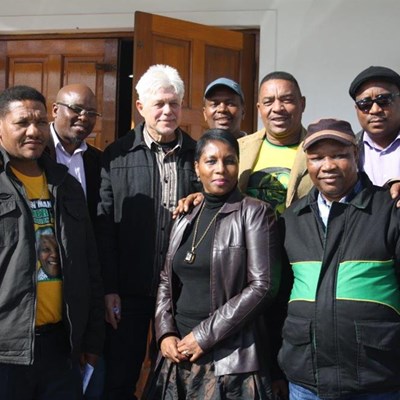 The ANC delegation at the press briefing included ward 27 candidate Adam Plaatjies, ward 13 candidate Kholise Langa, mayoral candidate (ward 2) Piet van der Hoven, Eden candidate Putco Mapitiza, proportional candidate Mervyn Olivier, secretary of the Southern Cape region Major Sokopo. Front Deputy Minister Ayanda Dlodlo and ANC George Chief Whip and proportional candidate Charlie Williams.
GEORGE NEWS & VIDEO - “Charles Standers has not approached the ANC for a position. Rumours in this regard are devoid of all truth.”
These were the words of the national Deputy Minister of Public Service and Administration Ayanda Dlodlo at a press conference at the King George Protea Hotel called by the ANC this afternoon. Dlodlo has been deployed to the Southern Cape and George in the final run up to the election.
Dlodlo, also an NEC member, was reacting to the resignation of former George Mayor, Charles Standers. She said the reasons that Standers provided for his resignation from the DA shows that the DA does not practice clean governance as they would have the public believe.
Standers cited corruption, racism, political interference and the leaking of alleged charges against him by the local DA caucus.
Asked if Standers is welcome in the ANC, Dlodlo said that anyone who shares their value system is welcome. “I have never met Mr Standers, but it would be nice if he endorsed us. We have no informal or formal arrangements with him.”
The ANC delegation at the press conference made it clear that they have not approached any DA councillor in George to join their ranks. However, earlier in the week, Deputy Mayor Daniël Maritz told the George Herald that ANC MPL in the Western Cape Legislature Cameron Dugmore had tried to reach him on his cell phone. Cameron, who also attended the meeting, admitted that he had phoned Maritz, but said that he was merely returning Maritz’s call.
“The person in question begged me for a meeting, and I couldn’t understand when he then did not answer his phone.”
Dlodlo added that it often happens that candidates who may not get a seat in council, make use of this tactic. “If you tell your party that the ANC wants you, you hope they may move you higher on the proportional list.” Maritz, who has suffered from health issues, is 18th on the DA list.
She said the DA is a comfortable home for those who hold racist views and asked the media and civil organisations to take hands with political parties to expose racism and corruption, regardless of their political affiliation.
She will be on the campaign trail in various towns in the Southern Cape until after the election on 3 August.
Watch a video below.
Click here for previous articles:
ARTICLE: ILSE SCHOONRAAD, GEORGE HERALD EDITOR
'We bring you the latest George, Garden Route news'