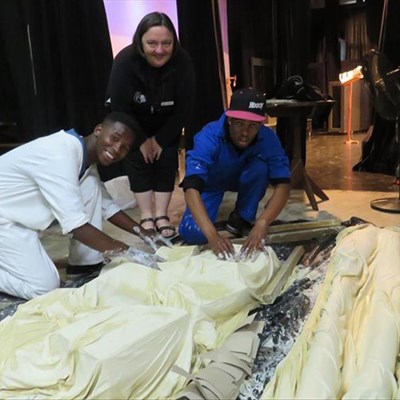 George Arts Theatre interns Jheffrey van Niekerk (left) and Xolisa Mtshiselwas are hard at work creating the set for the forthcoming Khumba on stage. With them is the theatre manager, Heather Stead.

GEORGE NEWS - Preparations for Khumba on stage are well underway.

During a backstage visit last week, it was a revelation to get a first-hand glimpse of all the creative energies being poured into the production, which is due to hit the planks at Oakhurst Insurance George Arts Theatre in December.

The handcrafting of 35 masks for the faces of the characters is an innovative process and Pieter Beukes, husband of producer Carina Beukes, managed to devise a way to design and engineer them to a three-dimensional resemblance of the animated film on which the stage play is based.

They expressed their thanks to renowned puppeteer Roger Titley, who gave valuable technical advice for the making of the masks.

During the auditions, a careful selection process was used to find the 35 cast members and specifically the main characters who have speaking parts.

The actors come from different backgrounds. Carina Beukes (who is the seasoned TV co-producer and co-founder of the children's series Klikkerland), explained, "We have students from NMU and various schools banding together with professional people including teachers, and people from all walks of life.

We have such amazingly talented people in our area. Like Gaye Lambert the artist (who paints the masks), Nico Fourie and Aldo Calitz, who have a hip-hop school and help with the choreography.

"The Oakhurst Insurance George Arts Theatre is such a fantastic example of what we can achieve when people work together." 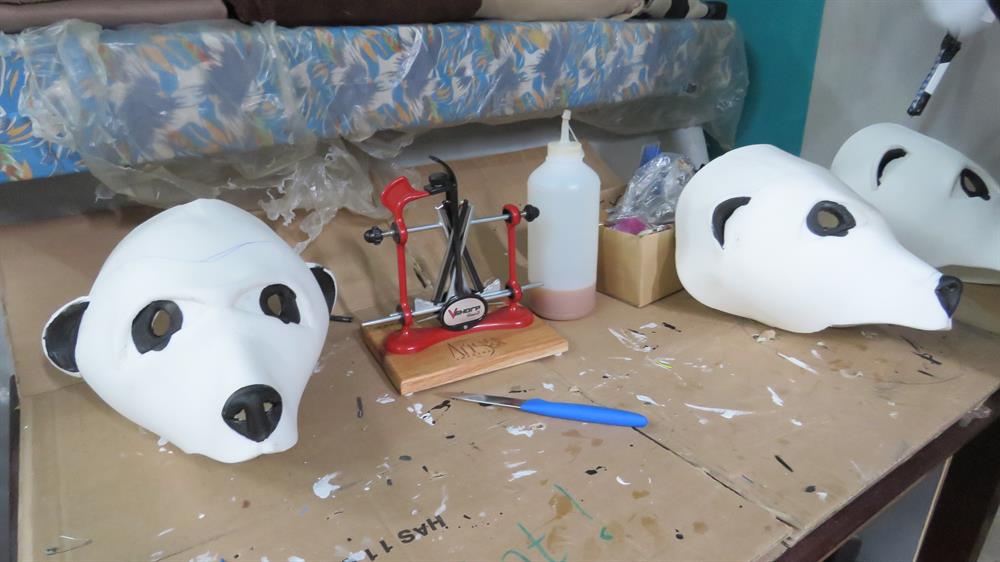 These meerkat masks are in the initial stages of design. They will be worn by local schoolchildren. All the masks have been designed by Pieter Beukes and are custom-made to fit the wearer. Local artist Gaye Lambert gives each animal character a different expression.

This will entitle the sponsoring company to an appearance of the character at their office or at a year-end function.

"It is stunning how the town has embraced the character adoption process that we are running to raise the funds needed to put on this show, from Highgate Ostrich Farm sponsoring the feathers for Bradley the Ostrich to The Little Art shop adopting some Meerkats, and many more businesses that have become involved," said Beukes.

The storyline is endearingly brought to life by talented actors, artists, directors, seamstresses, and set designers. George Arts Theatre Manager Heather Stead (left) and producer Carina Beukes admire the artwork on the masks that will be worn by the Khumba characters. Carina is a hands-on producer who helps cutting the masks and writing scripts and oversees the myriad of details that go into the making of a production. Photos: Pauline Lourens

The production team totals 77 people. Children and adults can look forward to attending the vibrant play in the December holidays.

Tickets can be bought online at www.georgeartstheatre.co.za or from the George Arts Theatre box office at 125 York Street or phone 044 874 3142.

Read a previous article: You can adopt a Khumba character