Update: Flying for women in Africa 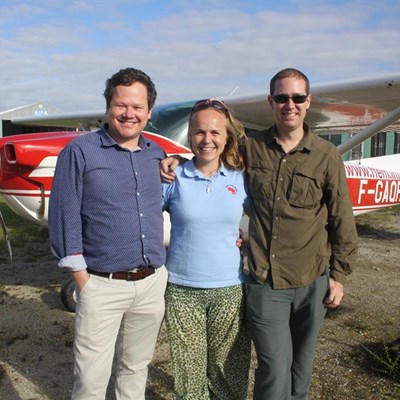 GEORGE NEWS - An obstetrician from the UK, Dr Sophia Webster, landed at George Airport after flying about 27 000km in a small airplane, visiting 24 African countries since the beginning of August.

Her mission: to promote safe pregnancy for women in Africa and to create awareness of the challenges faced by African mothers, who are much more likely to die when giving birth than European women.

On her epic trip, Webster, who only recently qualified as a pilot, was accompanied by US based British pilot and engineer Ross Edmondson, whom she had found on an online forum. He had done some flying in Africa and was up for the adventure, aptly dubbed 'Flight for Every Mother'.

"In Africa it is not strange for a woman to go to a hospital to give birth and not return home," the 33-year-old doctor-pilot explained to the George Herald.

On her journey, she stimulated discussion about the factors that influence the health of women during pregnancy and facilitated skills teaching among staff about the most serious complications during pregnancy. She visited numerous medical and midwifery units and recorded the stories of patients and carers they encountered. In this way, she gathered valuable information in each country, which will be handed over to influential organisations like the International Federation of Gynaecology and Obstetrics (Figo) and the UK Royal College of Obstetricians and Gynaecologists.

In every country she tried to meet with the health minister, but this was only possible in the smaller countries. "In most of the countries, the death of mothers has become a normal state of affairs. Everywhere I found doctors and midwives doing what they can, but then there are many women who do not have access to the facilities which are often under-resourced."

Extra security precautions for the two pilots were necessary in southeastern Nigeria where Shell provided protection, and in Darfur members of the UN accompanied them. "Yet, I want to say that the risk to me during this trip is less than the risk I would face if I were a pregnant woman in sub-Saharan Africa," stressed a passionate Webster.

The experience was a daunting personal challenge for Webster. It took 18 months of intricate planning and organisation - plotting the route, finding contacts in every country to set up appointments beforehand, budgeting, arranging travel documents and inoculations and finding a plane and another pilot to accompany her. She did all this while preparing to submit her final papers at the Royal College and qualifying as a pilot, which also required a large amount of studying.

Webster's trip was financed by sponsorship from the Clearblue pharmaceutical company, Rotary Club of Thornbury (UK), a donation from a friend and some money of her own. Her parents supported her by providing free lodging while she was doing her flight training. "I have come a long way, but am very satisfied. My skills have all really come together in this journey for a bigger purpose."
At George Hospital where she spent Tuesday, she shared the experiences of her journey with a very excited group of midwives and doctors who had, in advance, dedicated a noticeboard to the story of Flight for Every Mother. "One of the biggest challenges faced in this area is patients booking very late in pregnancy for antenatal care, giving less opportunity to identify risk factors and make plans to keep pregnancies as safe as possible," she commented.

Their next stop is Cape Town where Webster will be working at Groote Schuur Hospital until Christmas.