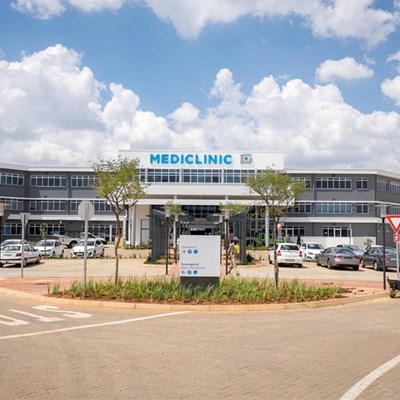 The new Mediclinic George will be designed along the same lines as the new Mediclinic Midstream in Midrand (above), between Johannesburg and Pretoria.
GEORGE NEWS - The development application of Mediclinic George for its new state-of-the-art hospital at Kraaibosch is expected to serve before Council at the end of February.
The land for the proposed R500-million development is situated near the old sawmill, north-east of the Garden Route Mall.
Mediclinic George announced its expansion plans in August 2015, stating that it had to provide for a fast-growing demand for medical services in the Southern Cape. The new hospital will incorporate Mediclinic Geneva and a separate doctors' block.
The Neuro Clinic will stay where it currently is and was completely revamped last year.
Mediclinic George Manager Kassie Karstens said he does not want to comment before the application served before Council and their decision was known.
Click here for previous articles:
• Application for new Mediclinic making progress
• New R500-million Mediclinic George
• Specialists need proximity to hospital
ARTICLE: ALIDA DE BEER, GEORGE HERALD JOURNALIST
'We bring you the latest George, Garden Route news'
Posted on: 12:52 Tue, 31 January 2017
Your Comments