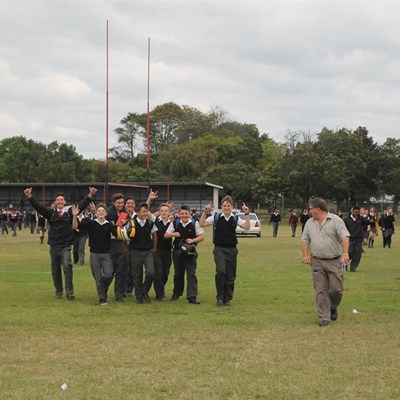 GEORGE NEWS FLASH - PW Botha College was evacuated at 09:30 this morning (4 November) after someone phoned the 10111 emergency number saying there was a bomb at the school.

A staff member of PW Botha told the George Herald that the police immediately notified the school about the bomb threat and that the bomb squad and dog units were on their way. Everyone was instructed to leave the building.

The school was immediately evacuated and the learners assembled on the rugby field in accordance with their bomb drill training. The learners were then moved into the shade on the grandstand. The police combed the school buildings for 45 minutes, but found nothing and declared the school safe.

The learners returned to class at 10:50.

Kobus Koekemoer, the schools safety officer said the evacuation process was orderly. “Everybody carried out their tasks as per the prescribed procedure.”

The police are investigating.
More information to follow as it becomes available.
ARTICLE AND PHOTO: MYRON RABINOWITZ, GEORGE HERALD JOURNALIST
'We bring you the latest George, Garden Route news'
Posted on: 12:37 Fri, 04 November 2016
Your Comments