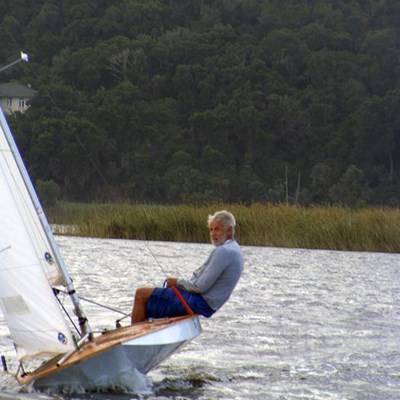 This was the best wind experienced for GLYC's racing since the New Year Regatta at the end of December, although it was challenging for a group of novice Optimist sailors.

However, the senior boats could get planing on the reaches at long last. The scheduled set of three races could be completed without problems, although there was a decrease in numbers for the last race. Including a Hobie 14 out cruising, there were 22 boats sailing. Some of the youth sailors were away, taking part in Laser 4.7s at the Western Cape Laser Championships in Simon's Town.

In the junior fleet, the Tera Sports of Pia Marriotti and Robyn Hellstrom were out in front of the Optimists. The Optimists had the
experienced sailors Matthew de Villiers, James Vonk and Sean Vonk ahead of newcomers to Optimist racing - Jordyn and Jason Soldin, Matthew Kershaw and Luke de Villiers. Race wins for races one and two went to De Villiers ahead of Hellstrom, but Hellstrom was the winner of race three, ahead of De Villiers. Overall for the Island Lake Trophy, the series winner is De Villiers.

The senior fleet comprised mainly Lasers, plus a Sonnet, a GP14 and a Gypsy. There was also a small Gandalf fleet of Di Turner's Mirror, Hans Hefer's Laser and a Gypsy sailed by Ryan Hodgson. The front of the senior fleet was contested by the Lasers of Chris Brooks, Malcolm Osborne and John Marc Olivier.

Olivier got the lead in race one and was able to hold it to the end, with Osborne and Brooks close behind. Osborne had the initial lead in the second race, but was overtaken up the second beat by Olivier, to produce similar finishing positions. In the lighter wind of the third race, Olivier was again able to hold on to first place, pursued by Osborne.

Brooks fell back, and found himself having a dice with the Sonnet of Dave Jones. Overall winner on the day on handicap was Olivier, but results still have to computed against skipper handicaps, combined with the previous races in this series. Di Turner and Hans Hefer only sailed one race in the conditions, leaving it to the Gypsy of Tom Barry to sail all the races.

After tea, a naming ceremony was held. In recognition for many years of sponsorship of GLYC events, the new landing stage of the jetty was proclaimed the Sothebys Landing Stage. Tim Kirby of Sothebys International Realty, George and the commodore David Laing unveiled a plaque on the landing stage.

Kim Cup sailing last week
Last week's (Sunday, March 16) racing at the George Lakes Yacht Club, Sedgefield, was for the senior fleet's Kim Cup. In view of the Port Elizabeth Inter-schools Regatta, there was no official race for the junior fleet.

The Garden Route had been engulfed in fog overnight, lasting into the morning, but once the sun burnt through, sailing conditions on Island Lake looked to be brighter. A light, variable south westerly wind was blowing for the 14 boats competing.
The Fireball team of David Laing and Mark Dee was in front as usual, trying out a new set of sails in preparation for their imminent trip to Thailand to compete in the Fireball World Championships.

The Lasers were lead in the first race by John Marc Olivier, chased by Bill Turner and Malcom Osborne, with Henry Paine also close behind. Osborne and Paine chose another course for the second heat, which proved to be better. Osborne went into the lead, which he was able to hold to the end. Olivier fell back to second place, with Paine close behind. In the second race, Olivier made no mistakes, leading to the finish, followed by Paine and Osborne.

This series for the Kim Cup is scored on skipper handicaps, which permits race wins to go to boats further back in the fleet. On this
basis, the winner on handicap of the first race was Guy Dormehl, with Chris Brooks in second place. Brooks was the handicap winner of the second race, with Turner in second place. Overall for the two races, leading is the Laser Radial of Brooks.