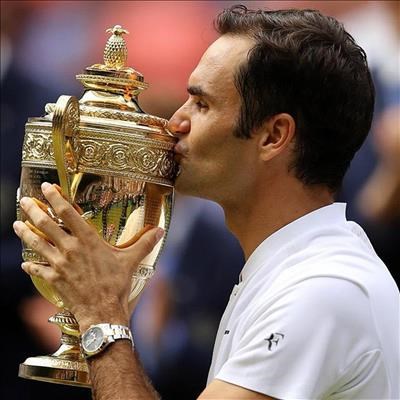 Federer's eighth Wimbledon triumph was his most emphatic yet.

TENNIS NEWS - Croaky and hung over, Roger Federer could barely recall where he had been as he celebrated until dawn, but he was soon smiling as that familiar warm feeling of waking up as Wimbledon champion seeped back into his mind on Monday morning.After his surprise win in the Australian Open at the start of the year Federer said he had "partied like a rock star", and he was at it again following his record eighth Wimbledon triumph on Sunday that took his career grand slam tally to 19.Sitting proudly reunited with his favourite trophy back at a near-deserted Wimbledon, Federer told reporters: "My head's ringing, I don't know what I did last night. I drank too many different types of drinks I guess."After the ball we went to, I guess it was a bar, with 30 or 40 friends and had a great time. I got to bed about five and woke up not feeling too good."He started to feel better as he thought back to his straight sets dismissal of Marin Cilic, along with the realisation that a few weeks short of his 36th birthday, having had six months out of the game to recover his fitness, he was still able to produce tennis of a quality nobody else in the game can match.Asked if he was now targeting a 20th slam, or perhaps 10 Wimbledon titles, Federer said he had learned from his six months out not to look too far ahead."The target now is to enjoy being Wimbledon champion," he said. "I haven't set a sight on a number of grand slams; I was very content at 17, that was a wonderful number. So was 18, and now 19 is great."I think now it's about enjoying myself, staying healthy and playing for titles."Federer's eighth Wimbledon triumph was his most emphatic yet - he is the first player since Bjorn Bjorg in 1976 to do it without the loss of a set.That he was able to do that, and win the Australian Open in January, and that Rafael Nadal could take his 10th French title last month, has re-ignited the debate about the dearth of challengers to the sport's "big four".Federer said he felt the current complicated points system did not adequately reward some of the younger players for their occasional successes against the big guns on the regular Tour and that it was consequently difficult for them to put together the consistent run of upsets necessary to climb the ladder.However, he also said some of them needed to show a bit more ambition if they wanted to break the status quo. Federer, Nadal, Murray and Djokovic have between them taken all the men's singles titles at Wimbledon since 2003."It's frightening to me at this level that when I look at the stats that the guy I'm going to face has played 2 percent serve and volley points in the championship," Federer said."I wish we would see more players, more coaches, taking chances at the net because good things do happen.