GEORGE NEWS - The stage has been set for an awesome day of international rugby action at Outeniqua Park on 7 April when the City of George hosts the historic GUINNESSPRO14 championship encounter between the Southern Kings and Irish powerhouse, Munster.

In addition to seeing their local Kings heroes in action, fans could also have a unique opportunity to witness international stars such as Peter O’ Mahony, Conor Murray and CJ Stander display their skills, should they be included in the team.

The trio all featured on the Lions Tour to New Zealand in the Summer of 2017 and it will be a rare treat to see them live in action.

With 62 caps to his name the 28-year-old featured in Ireland’s first ever win over the Springboks on South African soil in June 2016, and won selection on his second British and Irish Lions tour, starting all three Tests as the tourists drew the Series against the All Blacks in 2017. 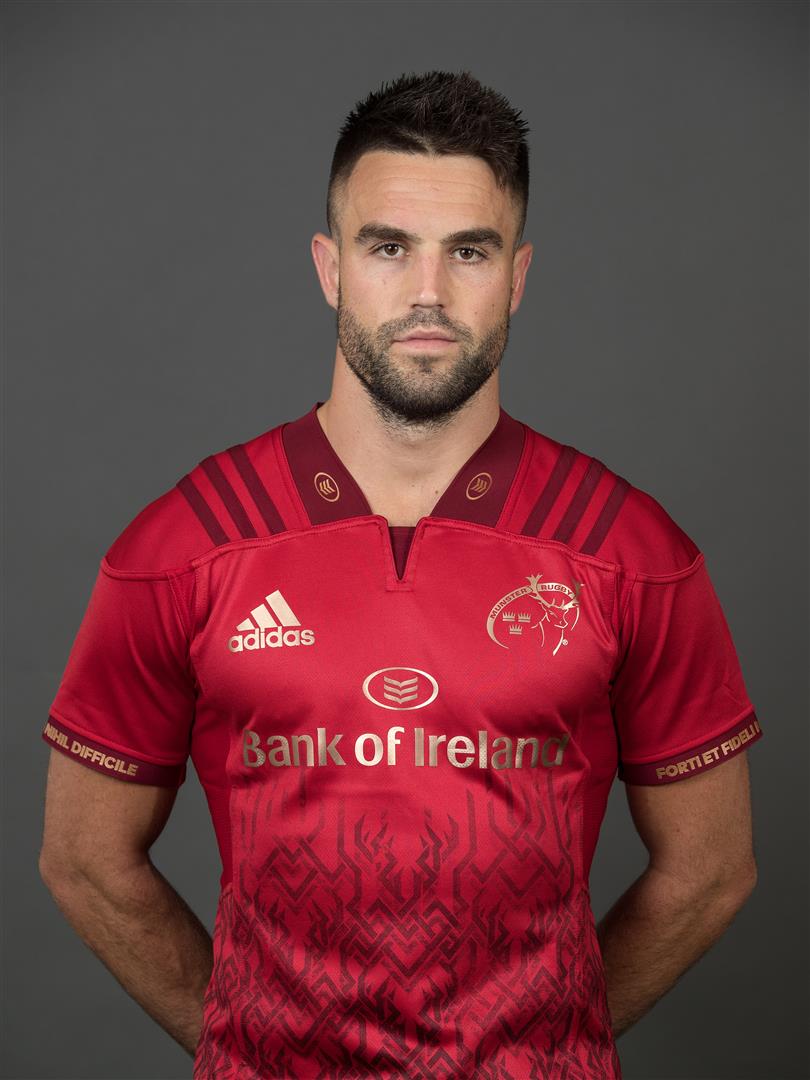 In scoring a try in the second Test, Murray became the first international player in history to score four tries against the All Blacks - three for Ireland and one for the Lions.

Peter O’Mahony
Peter O’Mahony captain for Munster captain made his senior debut for Munster against Ulster in January 2010 and has played for the province on 102 occasions, scoring 12 tries. He was named Munster Rugby’s Young Player of the Year in 2012. 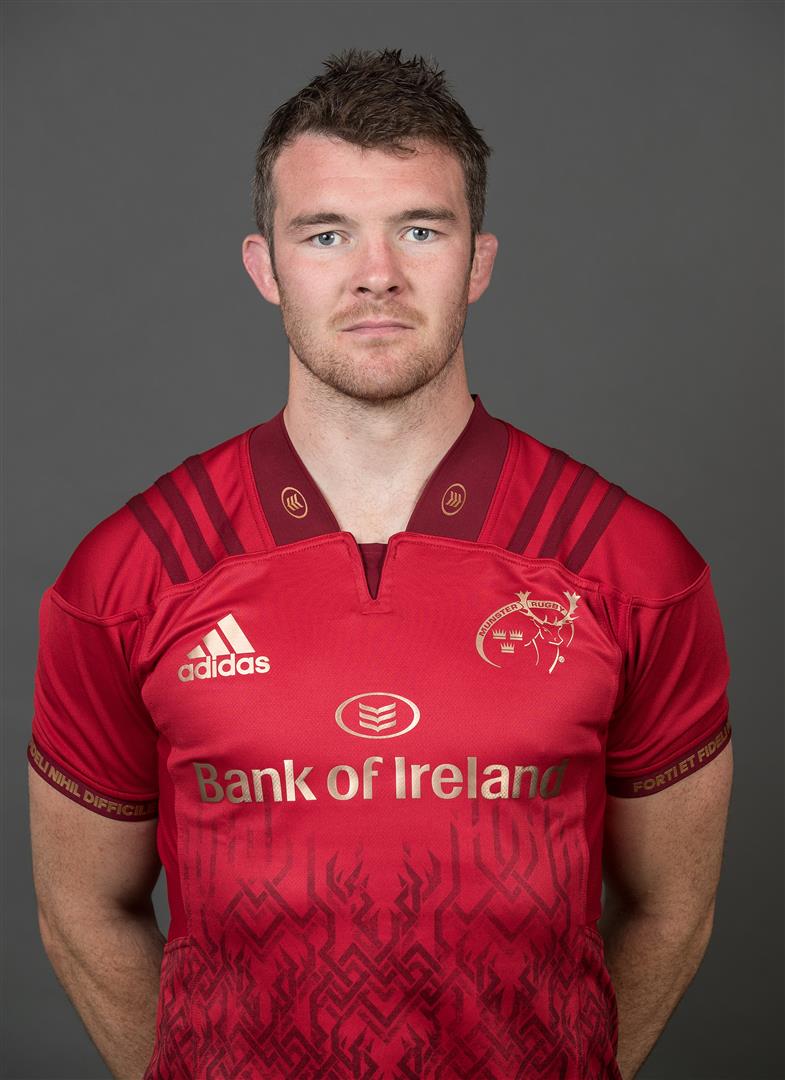 The 28-year-old won selection on his first British and Irish Lions tour in 2017 - captaining the side to victory over the Maori All Blacks – and was awarded the captain's armband for the opening Test against the All Blacks.

CJ Stander
The province’s local connection to George, back row CJ Stander, is a hugely popular player on and off the field. Stander, who joined Munster in October 2012 after making the move from Super 15 side the Blue Bulls, scored two tries on his first start against Glasgow Warriors that December, and has represented the province 102 times, scoring 32 tries. 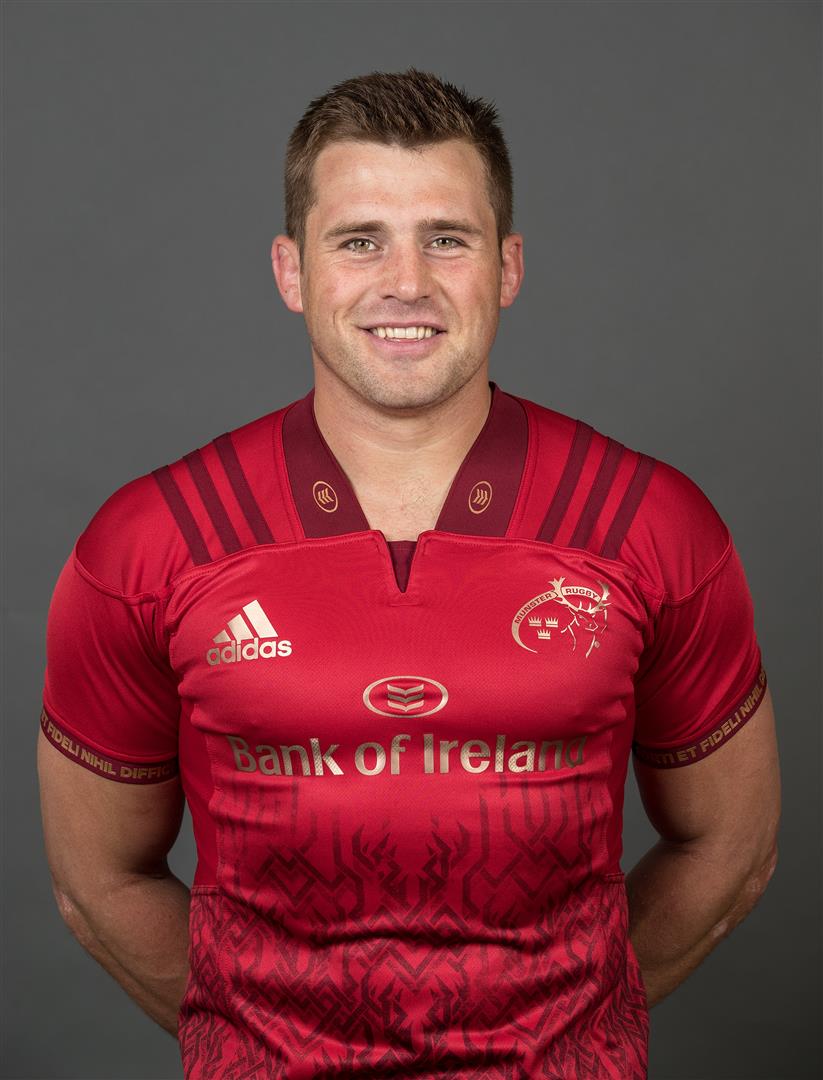 The 27-year-old was named the 2015 Munster Rugby Player of the Year in April, becoming the first overseas player to be awarded the accolade, and was included in the 2014/15 PRO12 Dream Team.

Stander became the first player to claim the Munster Rugby Player of the Year award for the second year in succession in May 2016, after scoring seven tries in 21 appearances, and captaining the side on 18 occasions.

Adding spice to the affair is the possibility that former star Kings flanker, and crowd favourite, Chris Cloete, who now finds himself in opposition colours, may come up against his erstwhile franchise.

The Southern Kings recently recorded their maiden victory in GUINNESSPRO14 championship with a resounding 45-13 win over the Dragons and amongst their current crop of players names to look out for include centre and vice-captain Luzuko Vulindlu, hooker and captain Michael Willemse and standout lock forward Arthur “Bobby” De Wee.

Luzuko Vulindlu
Luzuko finds himself in fine form at the moment having scored a brace of tries in the Kings recent win over the Dragons. His rugby debut was in 2008 where he played for the Sharks against the Hurricanes and won man of the match.

When he’s not on the field, he likes to listen to a variety of music, including R&B, Hip Hop, House and Gospel to unwind. He also enjoys action cricket and spending time with friends or meeting new people.

Michael Willemse
Michael is a Hooker in the Kings squad and also team captain. Despite a tough campaign for his team he has personally featured near the top of the official Opta Stats rankings for Most Turnovers Won all season. His rugby debut was in 2015 where he played for the Stormers against the Sharks.

When he’s not on the field, he enjoys fishing, hunting and golf. His favourite movie is The Guardian. When you invite him for dinner, include sushi on the menu. Follow him on @mikeyWillemse_2 on Instagram.

Arthur “Bobby” de Wee
Arthur’s position in the team is Lock/Flank. His best rugby memory is when he made his Currie Cup debut in an unbeaten season with the Lions and winning the Currie Cup. When he’s not on the field, you will find him spending time with family and friends, travelling or gaming. He listens to R&B and Hip Hop music.

For more information on tickets go to www.skings.co.za and for online purchases to www.ticketpros.co.za.

“This is really going to be a special occasion and we expect a huge crowd to turn out. I advise everyone to get their tickets early”, said Hennie Baartman, President of South Western Districts Rugby. Baartman also confirmed that the day’s activities would include a number of club fixtures between Progress Rugby Football Club and Evergreens Rugby Football Club with the clash between their first teams acting as the official curtain-raiser to the Kings vs Munster match.

“We’re enormously pleased that Progress and Evergreens have agreed to be part of the day. These are two local clubs of great tradition and with massive support and they have both have been responsible for producing some of the finest players from our region. This is not only going be a huge boost for our city but also for the sport of rugby in the area. It will inspire our young players to see icons of the game from up close”, he said. 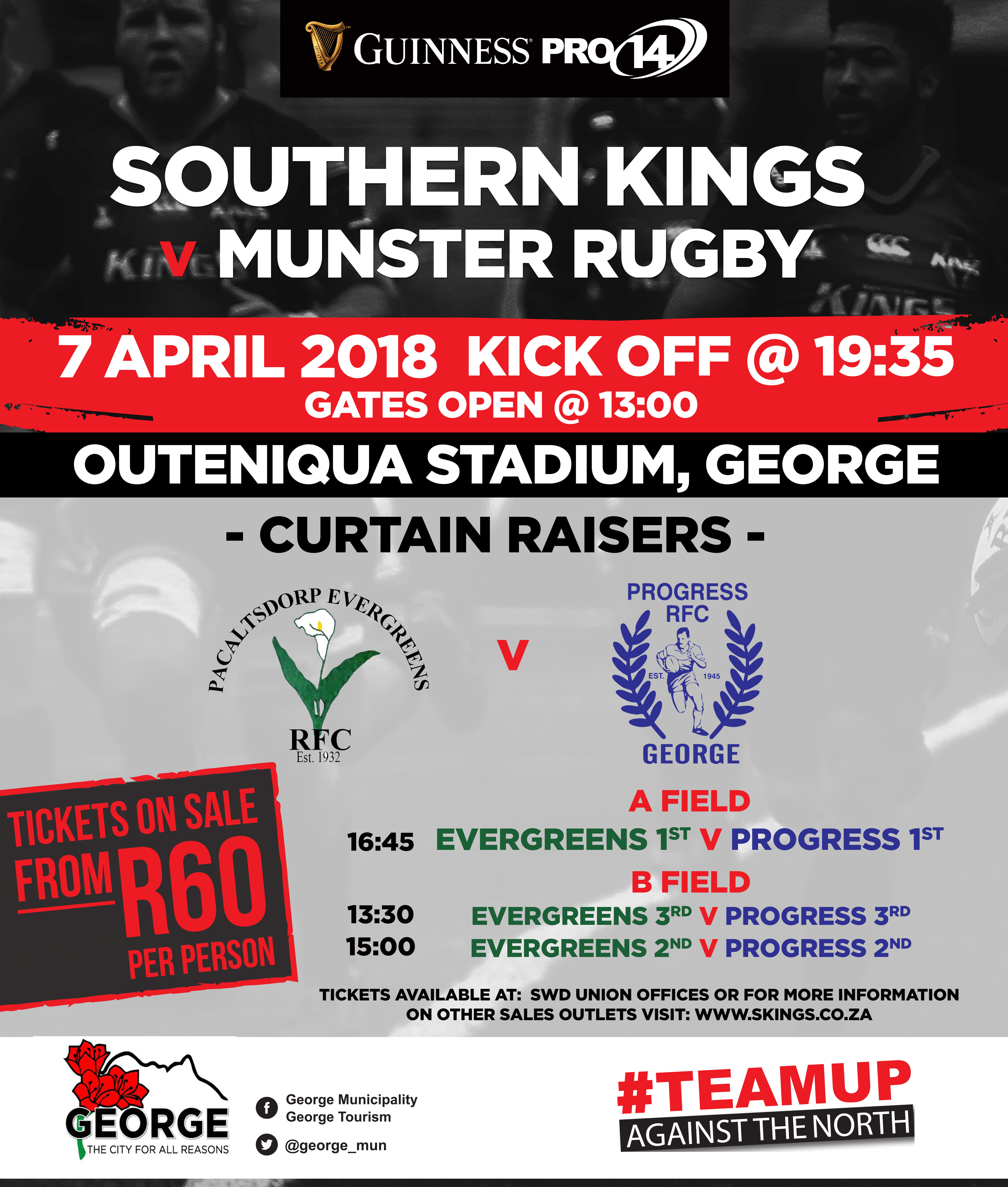 In true George tradition the festival air of the occasion will be complemented with a beer tent and food vendors on-site to ensure spectators remain refreshed at all times and AlgoaFM will be broadcasting live from the venue between 12:00 and 15:00 on the day.

“George has a proud history of hosting successful international sporting events and we’ve pulled out all the stops to ensure this one will be no different. We look forward to welcoming visitors to our beautiful part of the world and have no doubt they will enjoy their stay”, said Mayor of George, Councillor Melvin Naik.

For his part Chief Operating Officer of the Southern Kings, Charl Crous was equally excited. “It’s always been part of the Southern Kings’ mission to bring international rugby to all our people and to see the enthusiasm with which the people of George have embraced this occasion is quite amazing.

South Western Districts has always been a key component of our franchise and has not only provided us with passionate support but also a number of great players, as well as our Head Coach Deon Davids.

"We’re determined to reward our fans with a good performance on April 7”, he said.

The move is also part of a wider initiative to familiarize the broader rugby public with the GUINNESSPRO14 Championship brand. This is the first season of South African involvement in the competition, which also features the best Irish, Welsh, Scottish and Italian teams, and, despite a difficult start, the Kings will have new-found confidence after securing their maiden win in the Championship over the Dragons last weekend.