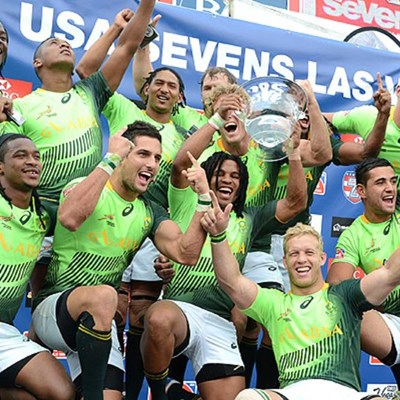 Blitzbokke celebrating in Vegas. Photo: Rugby365
NATIONAL NEWS - The Springbok Sevens powered their way to their fourth title in five tournaments this year, opening up a massive 23 point lead at the top of the HSBC World Sevens Series log with a hard-fought win in the Las Vegas Sevens.

The win gave the Blitzboks their third title in a row after winning in Wellington and Sydney, and added to their Dubai victory and final loss in Cape Town sees them commanding the World Series and a step closer to their goal of winning the Series for the first time under coach Neil Powell and second time in history.

But while the other victories were peppered with finesse, this one was a grind as the Blitzboks literally clawed their way through the tournament, beating Australia 17-14 in the quarters on Sunday, before a narrow and tense 20-17 win over the USA in the semis and then a heated 19-12 win over arch rivals and defending champions Fiji in the final.

It was Fiji’s discipline that let them down as they conceded a yellow and red card in the final, taking away any hopes they had of catching a Blitzbok side inspired by Rosco Speckman’s magic.

And while they struggled without stars Kwagga Smith and Seabelo Senatla, who have left the team for 15s rugby, they still had enough firepower and a good enough defence to win the tournament.
Read more on SuperSport.