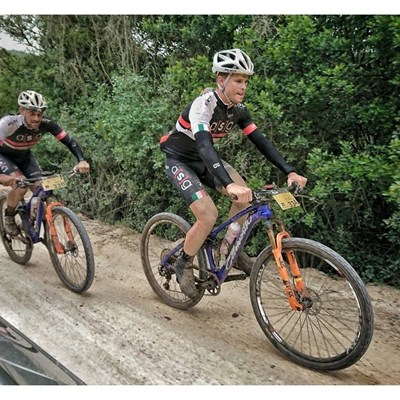 Pieter Seyffert (left) and Travis Walker from Ellsworth-ASG set the pace on the first day of the TransCape race on February 5. Photo: Jacques Marais
NATIONAL NEWS - Despite wet conditions, Pieter Seyffert and Travis Walker kicked off their new partnership on a perfect note by winning the opening stage of the seven-day TransCape mountain bike race on Sunday, February 5.
The Ellsworth-ASG duo took control early on to cover the tough 80km ride between Knysna and Wilderness in 3:19:46.
They were followed home by Belgians Eddy Feliers and Kristof de Neys (Cicero Baik) in 3:42:42, with David and William Wertheim Aymes (Bromance) crossing the line in third in 3:42:43.
Seyffert, who hails from Helderkruin on the West Rand, said they were building towards next month’s Bestmed Tour of Good Hope in the Cape Winelands and were delighted with their debut outing.
“This is our first race together and it will be a good test to see what I have to do as Travis’s partner for upcoming stage races,” said the 30-year-old.
“I have a feeling we will be pretty good together. We have had a great start and will build on that as we learn from each other.”
After some heavy overnight showers, the riders faced a gentle drizzle through much of the stage, which took in sections of the well-known Seven Passes road – including Phantom Pass early on.
Walker, who had recently returned to SA after racing in Europe, said while the weather made the route more treacherous in places, there was a positive side as well.
“The rain can be good and bad,” said the 25-year-old, who has settled in Hilton in KwaZulu-Natal.
“The roads were quite gravelly and sandy, so the rain meant they were not that slippery and there was no dust from any vehicles going past.
“I don’t really mind the drizzle as I prefer it cooler than blazing hot.
“On the other hand, some of the parts were very muddy and if you are not careful you can go around a corner and slide on rocks or roots.”
The 690km event finishes in Franschhoek on Saturday.
Provisional results
Men’s teams:
Travis Walker, Pieter Seyffert (3:19:46); Eddy Felliers, Kristof de Neys (3:42:42); David Wertheim Aymes, William Wertheim Aymes (3:42:43); Pierre Cloete, Graeme Cumming (3:53:01); Reynard Tissink, Brandon Harcus (4:03:41)
Women’s teams:
Hannele Steyn, Catherine Williamson (3:42:44)
Mixed:
Ian Seggie, Jane Seggie (4:25:52); Craig Chidrawi, Charmaine Werdmuller (4:32:33); Matthias Kubli, Denise Kubli (4:44:24); Michael de Coster, Yolanda Witteveen (4:58:13); Simon Knutton, Sandra Johannessen (5:45:04)
Men’s solo:
Karl Dossche (3:51:23); Alan Tilling (3:51:24); Malcolm Dods (4:00:47); Peter Hall (4:05:59); James Whitehouse (4:05:59)
Women’s solo:
Alma Colyn (3:36:10); Mandy Langebrink (4:18:35); Nicola Geldenhuys (4:46:35); Chandre Wertheim Aymes (4:52:18); Susan Thornton-Smith (5:07:34)
'We bring you the latest Garden Route, Klein Karoo, Hessequa news'