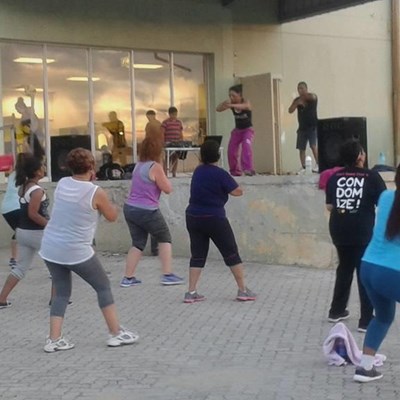 Instructors Martie and Brian Williams take their class through a Zumba routine.
GEORGE NEWS - "Zumba is the easiest fitness exercise there is. Anyone can do it, no matter their size." These are the words of Martie Williams, a sister at George Provincial Hospital.
In between shifts Williams spends her time as a Zumba instructor at Motion Fitness Centre situated at Redefine Boulevard Shopping Centre, York Street. Her classes are popular among members and visitors and sometimes more than 30 people attend.
Williams became a Zumba instructor by chance when an instructor at Virgin Active, where she was a member at the time, saw her potential and encouraged her to do the course. "It was at a time when Zumba was first introduced in South Africa and Virgin Active was the first to promote this new form of exercise. I instantly became addicted and never missed a session," says Williams.
In January 2013 she underwent the Zumba instructor basic 1 training and completed the aqua Zumba (Zumba in water) course in Cape Town during March 2013.
After a few months as a qualified instructor at Virgin Active, Williams decided to venture out on her own. She secured a venue at Red Square Hair Salon where she presented classes for a few months. Thereafter, she presented classes at Pacaltsdorp Stadium, St Paul's Anglican Church hall, Tyholora Primary School and South Cape College (staff wellness programme).
In 2014 classes were presented to George Correctional Services staff at the ambulance station as part of their wellness programme and in 2015 Zumba officially became supplementary to George Hospital's wellness programme. Sessions took place during their lunch hour. In November 2014 Williams's husband, Brian, also qualified as a Zumba instructor - one of the first men in the George area to achieve this.
After the loss of her mother, Martha Roelfse, due to cancer in 2014, Williams decided to host a Zumba fundraising event on behalf of Cansa at George Hospital during October - breast cancer awareness month. Motion Fitness Centre was the main sponsor of this year's event that took place place outdoors, at the gym. According to Williams, this will become an annual event.
Le Grange is the previous title holder of the beach bikini section of the bodybuilding competition in Mossel Bay. Having the support of my husband and children makes the journey worthwhile and motivates me to give my best at all times."
You can follow Martie Williams on her Facebook page: Zumba Martie Williams.
'We bring you the latest George, Garden Route news'