MOSSEL BAY NEWS - Martin Vorster made it two in a row for the GolfRSA National Squad when he coasted to a four-shot triumph in the East of Ireland Amateur Open Championship at Drogheda, Ireland on Monday, 3 June 2019.

The Mossel Bay junior became the second successive South African teenager – and only the second foreign champion – in the 78-year history of the high-ranking event when he followed fellow Southern Cape golfer Christo Lamprecht into the winner’s circle at County Louth Golf Club.

“Last year Christo won in Ireland, Wilco (Nienaber) won The Amateur qualifier and Jovan (Rebula) won The Amateur, so hopefully this is a good omen for the GolfRSA National Squad,” said the delighted Vorster.

Starting Monday’s 36-hole final four off the pace, Vorster showed some exceptional skills in the blustery southwest wind that gusted up to 50 km per hour across the Baltray Links.

He surged into a one-shot lead with a flawless five-under-par 67 in the morning, and had only one blemish on his card as he closed out victory on nine-under-par 279 with another superb 67.

Paul Hanlon from Carton House was within a shot after 54 holes, but the 2016 champion lost touch with the South African over the last nine holes. He took second on 283.

“This is amazing; I am so, so happy,” said Vorster.

“I won the Junior Open at St Andrews after a couple of close calls, and this year, I’ve come close again, but to win my first senior event here in Ireland is indescribable. The pressure was intense, and I’m so proud of the way I managed my game, especially in the last two rounds.

“My only goal was to try to keep the ball in play to give myself scoring opportunities, and it was tough to do in a three- to four-club wind. But I stuck to my strategy and it paid off.”

“My ball striking was really good, and I had a lot of birdie chances, but the putts just kept burning the edges. Christiaan kept me focussed on the next shot and the next shot. It was two amazing rounds, really, and I couldn’t be happier.”

The lanky Vorster hit 17 greens in regulation in the third round to take pole position, and nearly as many in the final round.

“I started birdie, birdie which gave me some really nice momentum,” he said. “The par threes were really tough in the wind, though. They played very long. I bogeyed the fifth, but I got the shot back with a birdie at the next short hole (eight) to turn six under.

“I missed makeable birdies at 10 and 11 and made a great par save from 12 foot at the 12th and Christiaan just kept telling me to keep plugging away, something will drop. At 14, I made a good up-and-down for birdie from the rough go seven-under.

“I hit a great 3-wood down the middle at 16, and I had 83 metres flag, but my second shot pitched on a down slope and rolled into the fringe. I had a five metre putt for birdie and I hit it just too hard. The 17th was straight into the wind with the pin at the back right. I hit a low punch 6-iron from 165 metres straight at the pin. It was my best shot of the day and left me with a tap-in birdie.”

Eight-under playing the last, Vorster was gunning for another birdie finish.

“I hit my tee shot just right off the fairway and punched a low 5-iron into the green,” said the world number 201. “I was just left of the green. I chipped it to four foot and boxed the putt.”

Vorster was unaware that the legendary Irish golfer Des Smyth – with 24 professional wins and two Ryder Cups – was hiding in the appreciative crowd and keeping an eye on action.

“Mr Smyth came up to me after the round to congratulate me and he chatted to me for a while,” the youngster gushed. “It was pretty really special to meet him. It’s not every day you get to meet a player of his calibre and I was humbled by his comments.”

Meanwhile, Yurav Premlall from Ekurhuleni finished birdie-birdie for a final round 72 that earned him a share of 10th on one-over 289 and a 72 netted Jordan Duminy from Southern Cape a joint 14th place finish on 290.
Casey Jarvis from Ekurhuleni recovered well after a disappointing third round 78 and carded 71 to tie for 27th on six-over 294.

The next stop for the East of Ireland seven is Scotland, and the St Andrews Links Trophy from 7-10 June. They will join fellow GolfRSA National Squad members Jayden Schaper, Wilco Nienaber, Luca Filippi and Therion Nel – travelling from the Brabazon Trophy – and compatriot Kyle de Beer, whose joint fifth place finish in the English Men’s Open earned him a spot in the starting line-up in Scotland. 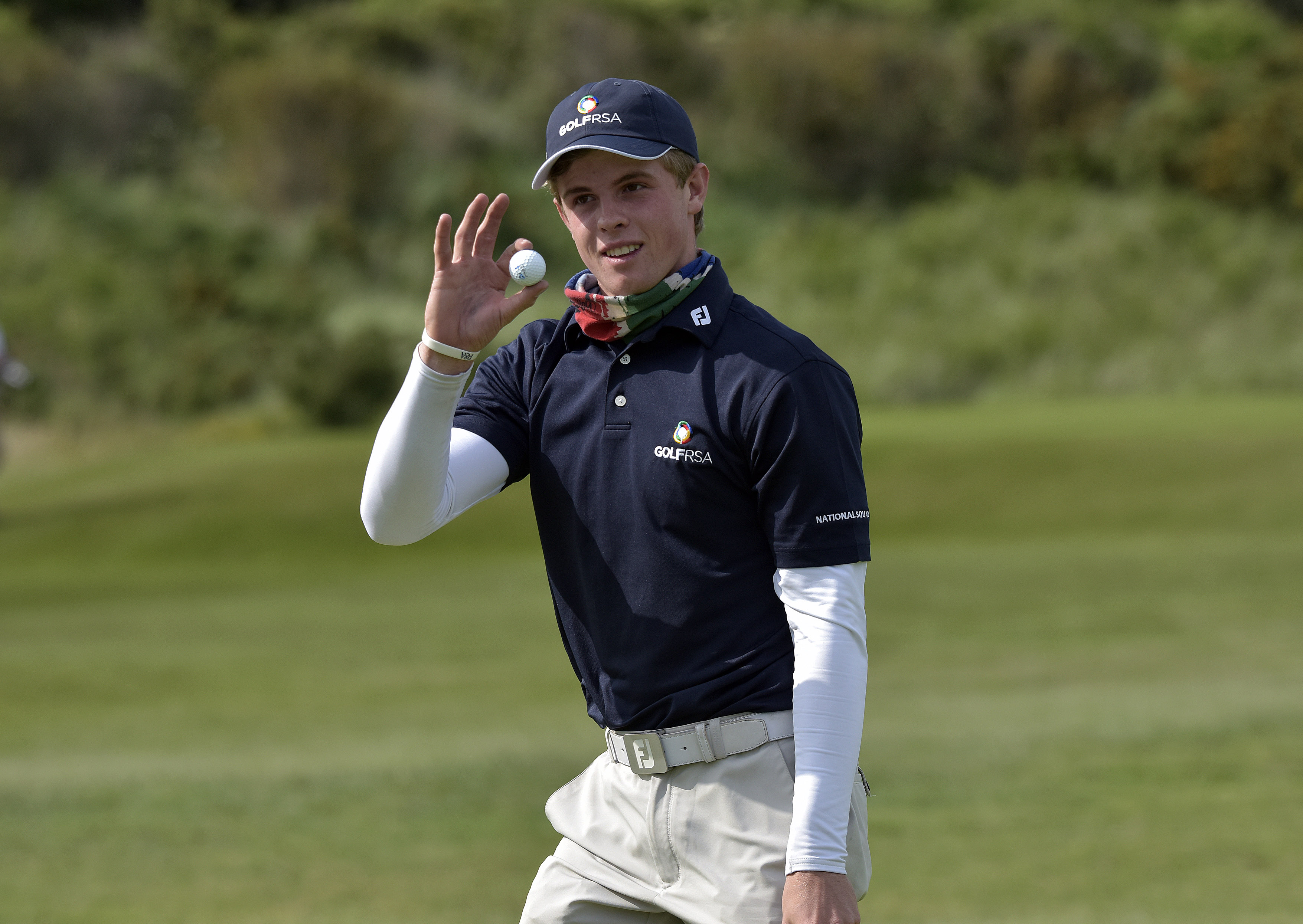