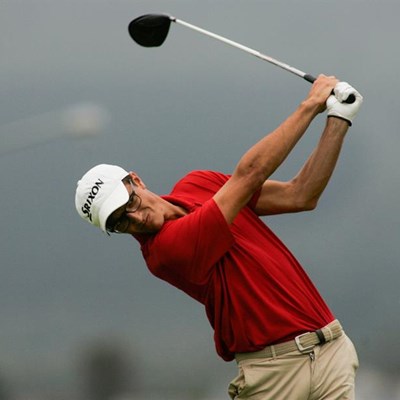 Phillip Swanepoel. Photo: Pieter Els.
SOUTHERN CAPE NEWS - The saying goes ‘when life hands you lemons, make lemonade’, but if Phillip Swanepoel didn’t have three rounds left in the South African Stroke Play Championship, the Stellenbosch student would have started brewing champagne after coming up trumps at Kingswood Golf Estate on Tuesday.
Five days ago, Swanepoel was still on the alternate list, but on a day of blue skies and a stiff breeze, the 21-year-old Pretoria native fired five birdies on his back nine to storm into contention.
An opening four-under-par 66 landed him in a three-way tie for the lead with Edgar Catherine from France and Scotsman Liam Johnston.
“I made the alternate list at the qualifier at Wellington Golf Club on the 19th of January and on Friday, I got the call that I was into the championship,” said the industrial psychology student. “I owe Stefanus Bonifatius big time.
“I wanted to make the most of this chance, but I never expected to be in the lead. I guess there is something to be said for keeping your expectations low and just playing shot for shot.”
Swanepoel overcame a bogey start and another drop at the 12th by keeping patient.
“I just stuck to my routine; I wasn’t going to start chasing birdies,” he said. “I made a solid birdie at 14 and that sparked some momentum for me. I putted really well; I wasn’t stiffing any shots and all my birdie putts were outside six feet.
“We all know that when the putter is working, it feeds the confidence. It also helped that I know the course. We come to George often as we have family here and my uncle has a house on the estate. I’ve played the course many times, so that also adds to the confidence.”
While it was Johnston’s first sight of Kingswood, Catherine played the course in 2013 as a member of the French team that contested the Ten Nations Cup – an experience he prefers to forget.
“It was terrible,” said the 18-year-old from the south of France. “I played the worst golf and I finished stone last in the field; what a great relief that I am doing so much better this time.”
The Frenchman started his run at pole position with an eagle at the par five third, and offset a lone bogey at 10 with birdies at eight, 11 and 16.
“That eagle gave me a good push,” he said. “I was in a good position after nine, even when the wind started pushing. The hardest thing was to understand the greens. Even if I played here before, we are not used to this grass. But I’m learning and I’m happy. I made a much better start than before.”
Johnson said competing on similar greens during a four-year stint at Chattanooga University in Tennessee helped him to come to grips with the grain.
“I haven’t played on greens like these in two years, but having played them certainly helped,” said the 24-year-old Scottish Golf Mens National Squad member.
"The weather was good with just a breeze, so you had to take advantage. I short-sided myself at one par five and one par four, so I’m very pleased with the start. My only bogey was a three-putt at 14, but this was my first competitive outing since November last year, so I’ll take a 66 to the bank.”
Local favourite Andre Nel put together a flawless display at his home course, but the KeNako Academy golfer came up one shot shy of the target.
“I was pretty solid tee to green and the game was there, but I left too many putts out there,” the 21-year-old said. “If I can warm the putter up on Wednesday, I’ll be in with a shout.”
Nel will start the second round with his Southern Cape Inter-Provincial team-mate Brandon Cloete for company, as well as Ireland’s Alex Gleeson and John Ross Galbraith, Victor Veyret from France, Sweden’s Oliver Gillberg.
Meanwhile Southern Cape junior Martin Vorster finished a further stroke back alongside Matt Saulez from KwaZulu-Natal and Western Province’s Deon Germishuys.
The South African trio share the bus at two under with Frédéric LaCroix from France; Jeremy Freiburghaus from Switzerland; England’s Joseph Long, Irishman Robin Dawson IRL and Ludwig Aberg from Sweden.