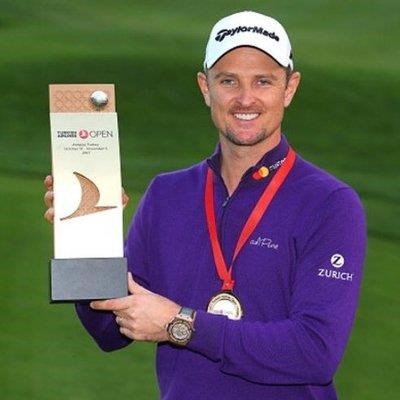 GOLF NEWS - Justin Rose and his wife have devised a novel way of celebrating their wedding anniversary – she will caddie for him at the Indonesian Masters next month, he has revealed.

Speaking after his final round at the Hong Kong Open on Sunday, where he finished tied 10th, he said: "I enjoy [playing in] Asia. Going to have the missus caddie for me.

"It's over our wedding anniversary, so it's going to be a whole different type of challenge.

"Finish with a flourish and all that," he joked.

When asked if his wife – former British gymnast Kate Phillips – was a strong reader of golf greens, he added: "She knows as much about golf as my little eight-year-old. We'll make it fun."

The English world No 6 announced last week that he would play in the Jakarta event in December, which is the finale of the Asian Tour.

"There's going to be a lot of guys grinding to have a good week and it's an important week for a lot of guys," said Rose.

"For me, it's a nice week to continue to play right before Christmas, but more of a fun trip for us than anything else."

The Indonesia event – which will be the first time Rose's wife has carried the bag for him – wraps up a busy schedule for the Olympic champion, who shot a solid but unspectacular 273 on the par-70 Hong Kong Golf Club course.

In the past month he has won tournaments in China and Turkey, before being pipped to the European Tour title in Dubai by Tommy Fleetwood last week.