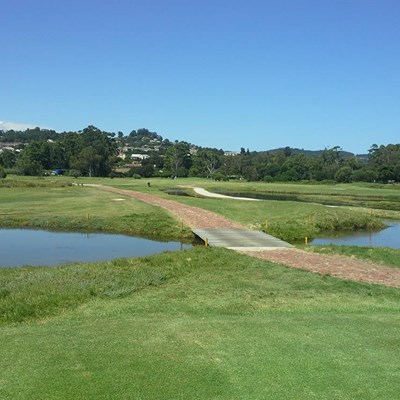 The 51st Nomads National Tournament, The Loerie Nationals, will be played at the Knysna Golf Club from 6 to 11 March.
KNYSNA NEWS - The flags will be raised at the Knysna Golf Club on 5 March to mark the start of the Nomads Golf Club's 51st National Tournament.
What started as an event held at Kyalami Country Club in 1966 between the two original Nomads clubs, Transvaal and Natal, quickly became an annual event held between, not only the 12 South African Clubs in existence today, but also a large contingent of international players representing Australia, New Zealand, Botswana, Zimbabwe and Swaziland.
The publicity generated by the early National Tournament's was of great importance to Nomads in that it made the formation of new clubs so much easier.
The National Tournaments can be credited with creating bonds of friendship that have developed and strengthened over many years and testament to this is seen in the fact that Nomads will be hosting its 50th National Tournament in 2015.
The National Tournament has been mirrored in Australia, Botswana, Zimbabwe and Swaziland, providing the same forum internationally that served so well as a catalyst for growth within South Africa.
The National Tournament has been hosted on a rotational basis by each of the Nomads Golf Clubs, affording participants an opportunity to travel annually to a different part of South Africa in pursuit of their intention to create new friendships and reaffirm old ones in the best Nomadic of traditions.
Each participating club competes for the co-veted Bert Hunt Trophy, which is awarded to the club with the highest team points scored average. Considering that each player plays four rounds over six days of the tournament on a me-dal Stableford basis, it is more an exercise of durability than skill and the team that lifts the trophy are entitled to feel proud of their success.
A host of individual honours will be on offer as well as the increasingly contested international trophies that are played for throughout the tournament.
The greens committee of Knysna Golf club is hard at work to ensure that the course will be in pristine condition for the arrival of these players.
A marque is currently being erected on the 10th fairway where the prize giving will be held each evening. Besides these, the players will be entertained throughout the tournament with a sit-down dinner on Sunday and Friday.
"The Cowboy bar (exclusively for players) offers good food, entertainment and laughter. A place not to be missed where the camaraderie of Nationals is experienced and fond memories made, new jokes and stories are told and good friendships cemented," said Flats Huisamen, national coordinator, Southern Cape Nomads Golf Club.
A practice round has been arranged for all participants at the Knysna Golf Course on Saturday, March 5.
"We cannot wait and are all looking forward to welcoming you to the fantastic town of Knysna for the 51st Nomads National Tournament, The Loerie Nationals," concluded Huisamen.
ARTICLE: FRAN KIRSTEN, CORRESPONDENT
'We bring you the latest Garden Route, Klein Karoon, Hessequa news'