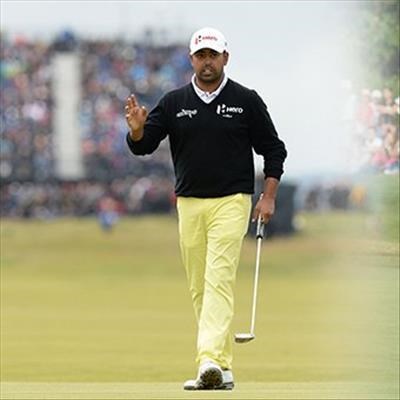 GOLF NEWS - Long pigeon-holed as a player who could only win on home soil, India's SSP Chawrasia believes he has finally found the form to take on the world's best on foreign fairways.

Chawrasia posted the leading opening round score in the Hong Kong Open Thursday, scoring an impressive 65 in blustery conditions to head a field including some of golf's most in-form players such as Justin Rose, Sergio Garcia and Tommy Fleetwood.

It is all a long way from the Royal Calcutta Golf Club, Asia's oldest course, where his father worked as greenskeeper and Chowrasia first learnt the sport as a caddie before picking up the clubs in his own right.

"My father was working there in Kolkata and he said 'You can’t play golf, it’s too expensive'," said Chawrasia, now 39.

Chawrasia has enjoyed an impressive run of form at home of late, making history – and €275 000 – in March by retaining his title at the Hero Indian Open with a seven-stroke win in New Delhi.

That feat made Chawrasia the first Indian to successfully defend a European Tour title, and the first player to win their first four events on the tour all in their home country.

But Chawrasia added a potentially more significant victory at the Philippines' Manila Masters last year, his first professional win abroad, and has his sights set on further victories on foreign soil.

"I won already last year in Manila … I'm trying. Still I'm not playing any Majors so that's my target hopefully. I'm playing Singapore, first event [in the] Asian Tour next year, and there are top four spots going to the British Open."

"When I'm playing, I'm just focusing on my game. If I'm looking at someone's world ranking or someone's scoring, I'm losing my confidence."

The highlight of Chawrasia's opening round was a remarkable recovery pitching wedge out of the rough and over tall trees approaching the par-five third hole, which he landed three feet from the pin.