Bangalore FC step up their game

The NMU students are struggling at the bottom half of the Geolfa League table.

The three goals were scored by Luthando Gum of NMU (unfortunately between his own side's goal posts!) and Thulani Sontashe of Bangalore and Ayabonga Siyoyo of NMU.

Bangalore are in second position in the league with 25 points after eight victories. They have scored 38 goals and conceded 12, drew one game and have two defeats after 11 matches played.

The NMU students are struggling at the bottom half of the Geolfa League table.

The game got off to a good start with Bangalore winning the first chance of the game with a corner kick, but they failed to open the net. Within 15 minutes Bangalore had their first goal on the scoreboard after Gum, an NMU defender, scored an own goal from a beautiful set piece from the left side of the field.

Both teams were playing beautiful attacking football and creating scoring opportunities. Bangalore was using the strength of Joka Makola in the centre of the field while NMU defenders were fighting off a strong attack from the Bangalore wingers.

NMU's Mhletywa created another offensive drive, but his side missed the target. Thulani Sontashe (Bangalore) launched another attack, driving a powerful shot, but it was blocked by the NMU goalkeeper. NMU tried to break through Bangalore's defenders but the NMU striker was caught off-side. Both sides were trying to play the ball on the ground looking for gaps. Gladile Samnkelo (Bangalore) tried his luck with a long-range shot outside the box, but his strike went over the bar.

NMU came back in full force but failed to score while Bangalore used their wings to penetrate NMU's defence. The exciting first half ended 1-0. 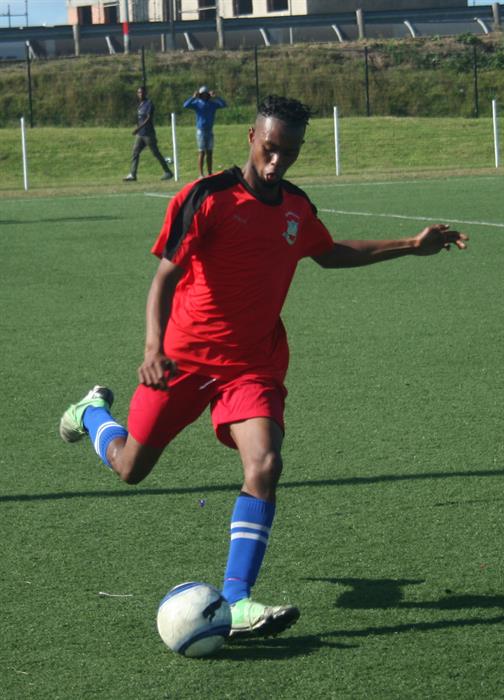 Thembelani Grootboom of Bangalore delivers a powerful cross during their game against NMU.

The second half started off on fire with both sides hunting for more goals. The students received the first free kick of the second half, but their striker failed to control the ball inside the box and it was cleared by Bangalore's defence. Iva Mhletywa (NMU) used speed to break through the right back of Bangalore but his ball was well blocked by the opposition.

On the right side, Joka Mpho (Bangalore) shot wide of the goal after a marvellous pass from the centre of the field. Siyoyo Ayabonga (NMU) surprised everyone when he scored the equalising goal, beating Bangalore goalie Zolani Qatana with a long-range shot just outside the box.

NMU took the game from Bangalore, pressurising Bangalore's defenders and forcing them to panic at the back. However, Thulani Sontashe managed to score the second goal for Bangalore to make it 2-1 after a brilliant cross played in from the right side of the field. The last 10 minutes were uneventful with both teams missing their chances and the Geolfa League game ended 2-1. Luyolo Klaasen (right), the Bangalore left winger, fights for the ball against Siyoyo Ayabonga of NMU. Bangalore posing for the camera before their game against NMU. Photo: Zama Gagu

'We bring you the latest Graaff-Reinet, Karoo news'