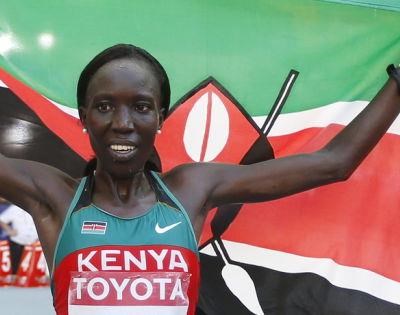 Edna Kiplagat.
ATHLETICS NEWS - Geoffrey Kirui and Edna Kiplagat produced a Kenyan sweep at the Boston Marathon, winning the men's and women's races on Monday by conquering the race's hilly final miles to establish their dominance.

Kirui finished in two hours nine minutes and 37 seconds after holding off a challenge by American Galen Rupp in the race's final stretch down Boylston Street, the site of the deadly 2013 bombing attack.

"He put in several surges and I was able to cover a few of them," Rupp told reporters after the race.

Kiplagat, a 38-year-old mother of two whose resume includes marathon wins in London, Moscow, New York and Daegu, ran alone for the final miles of the race and finished in 2:21:52, almost a minute ahead of Bahrain's Rose Chelimo.

The Kenyan maintained her comfortable lead despite briefly stopping in the final miles when she realised she had grabbed a rival's water bottle from an aid station and went back to return it.

"I had to put back something which was not mine," Kiplagat told reporters. "I was afraid, because you know, if you miss water it can affect you."
Read more on SuperSport.