INTERNATIONAL POLITICAL NEWS - France's largest employers' federation on Monday urged companies to "resist the blackmail" over a product boycott by Arab countries as a backlash widens over Paris's hardened stance against radical Islam.

French President Emmanuel Macron has vowed to take the fight to Islamic radicals after the October 16 beheading of a history teacher who had shown cartoons of the Prophet Mohamed to pupils in a class discussion on free speech.

But his comments triggered protests in Muslim-majority countries at the weekend, with people burning pictures of Macron in Syria and setting fire to French flags in the Libyan capital Tripoli.

Boycotts of French goods are under way in supermarkets in Qatar and Kuwait, with further calls to spurn French products in Jordan and other states.

On Monday, the head of France's MEDEF employers' federation said the boycott, which he described as "foolishness", was clearly bad news for companies already hard hit by the coronavirus pandemic. 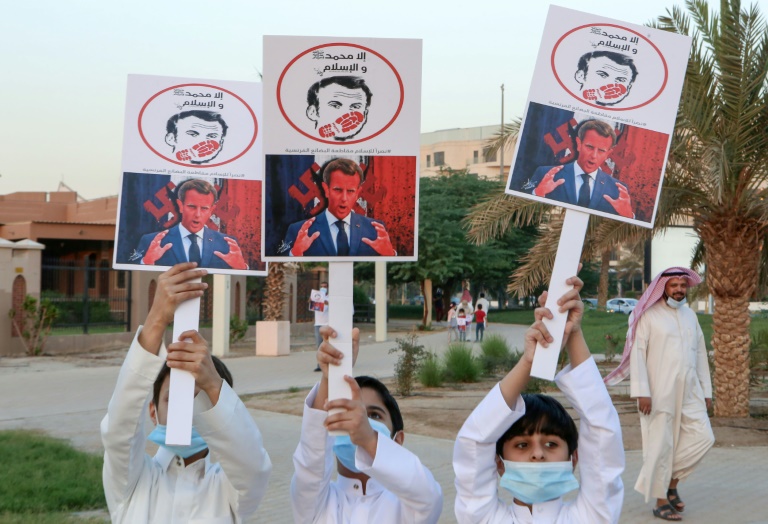 "But there is no question of giving in to blackmail," Geoffroy Roux de Bezieux told broadcaster RMC. "It is a question of sticking to our republican values.

"There is a time to put principles above business."

He said MEDEF supported the government's stance and urged companies "to resist this blackmail and, unfortunately, to endure this boycott", which he said remained "fairly localised" for now.

After teacher Samuel Paty's gruesome murder by a Chechen extremist in the name of avenging the Prophet Mohamed, Macron vowed that France would never give up cartoons such as those which in 2015 triggered a deadly attack on the Charlie Hebdo satirical magazine and which Paty showed to his class.

Macron hailed Paty as a "hero" for representing the secular, free-thinking values of the French republic, which include a long-cherished right to mock religion.

"He was killed because Islamists want to take our future," Macron said at a memorial for Paty. "They will never have it."

French teacher Samuel Paty was beheaded for showing cartoons of the Prophet Mohamed in his civics class.

Several suspected Islamic radicals have been arrested in dozens of raids since the murder, and about 50 organisations with alleged links to such individuals have been earmarked for closure by the government.

Earlier this month, Macron unveiled a plan to defend France's secular values against a trend of "Islamist separatism", and described Islam as a religion "in crisis".

France has in recent years been forced to take a hard look at its core values, perceived by many to be threatened by Islam following a string of jihadist attacks that have killed over 240 people since 2015.

But Macron's stance has fuelled tension between France and the Muslim world, with Turkish President Recep Tayyip Erdogan telling his counterpart to undergo "mental checks" for treating "millions of members from different faith groups this way".

The comments prompted Paris to recall its envoy to Ankara.

Maher al-Huli, a leader of the Palestinian Islamist group Hamas, condemned the comments by Macron "and whoever offends the Prophet Mohammed, whether through words, actions, gestures or drawings".

The Lebanese Shiite movement Hezbollah and Morocco have also spoken out against France.

On Monday, the Taliban in Afghanistan added its voice to the outcry, saying Macron's comments amounted to "a stand against nations".

The Taliban said "it would be better if he carefully studied Islam instead of making ignorant Islamophobic remarks".

The head of the Amman chamber of commerce, Khalil Haj Tawfeeq, in a letter to the French ambassador to Jordan, called on Macron to apologise to the Islamic world.

France's Culture Minister Roselyne Bachelot insisted Monday on BFMTV that there was "no fight against French Muslims, there is simply a fight against Islamism and terrorism".

Fresh protests are planned Monday in the Gaza Strip and Tuesday in Amman.