This year's address comes with Moscow locked in diplomatic disputes with the United States and Europe over a Russian troop build-up on Ukraine's borders and a series of espionage scandals.

The IK-3 penal colony where jailed Kremlin critic Alexei Navalny was reportedly transferred in the city of Vladimir.

POLITICAL NEWS - Vladimir Putin delivers a state of the nation address on Wednesday as Russia deals with a crisis in ties with the West and faces calls for mass protests in support of jailed Kremlin critic Alexei Navalny.

The longtime Russian leader's annual speech to lawmakers and regional governors sets the political agenda and last year saw Putin lay out a plan that eventually gave him the power to stay in office until 2036.

This year's address comes with Moscow locked in diplomatic disputes with the United States and Europe over a Russian troop build-up on Ukraine's borders and a series of espionage scandals. 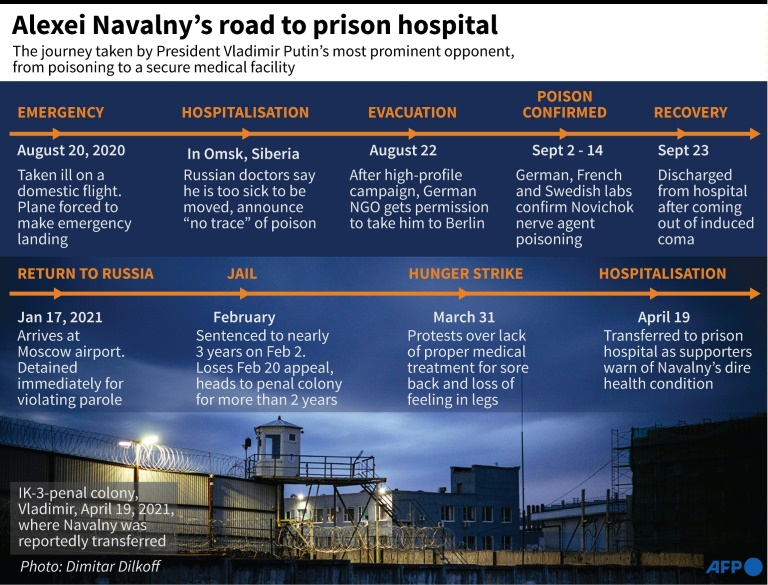 With parliamentary elections due in September, Putin will be looking to shore up his public support and is likely to remain defiant with the West, as well as announcing a series of measures to boost Russia's pandemic-hit economy.

But the speech threatens to be overshadowed by country-wide demonstrations called by Navalny's supporters, who fear the life of Putin's best-known critic is in grave danger.

Navalny's team has called for protests from 7:00 pm (0400 GMT) in cities across Russia to support the anti-corruption campaigner, who launched a hunger strike three weeks ago to protest his lack of medical treatment in prison.

Police have issued warnings against joining Wednesday's rallies, saying they are illegal gatherings. They arrested thousands during anti-government demonstrations earlier this year.

Navalny was detained after he returned to Russia in January after months recovering in Germany from a near-fatal poisoning he blames on the Kremlin - an accusation the leadership roundly rejects. 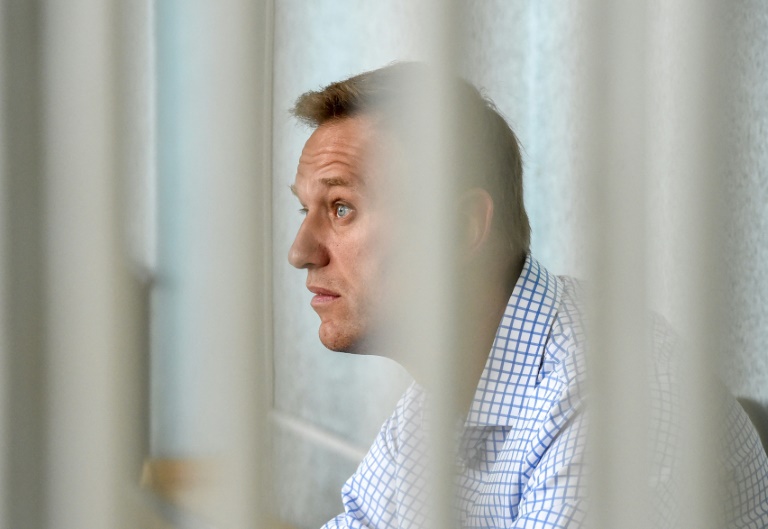 Russian opposition leader Alexei Navalny was detained after he returned to Russia in January after months recovering in Germany from a near-fatal poisoning he blames on the Kremlin -- an accusation the leadership roundly rejects.

He was sentenced to two-and-a-half years on old fraud charges his supporters say were politically motivated and has been serving time in a penal colony about 100 kilometres (60 miles) east of Moscow.

His team this weekend announced the protests to coincide with Putin's speech, after his doctors said Navalny was suffering from a range of ailments in prison and could die at "any minute".

The European Union and the United States have imposed sanctions on Russia over Navalny's poisoning, and on Monday threatened Moscow with further penalties in the event of his death. 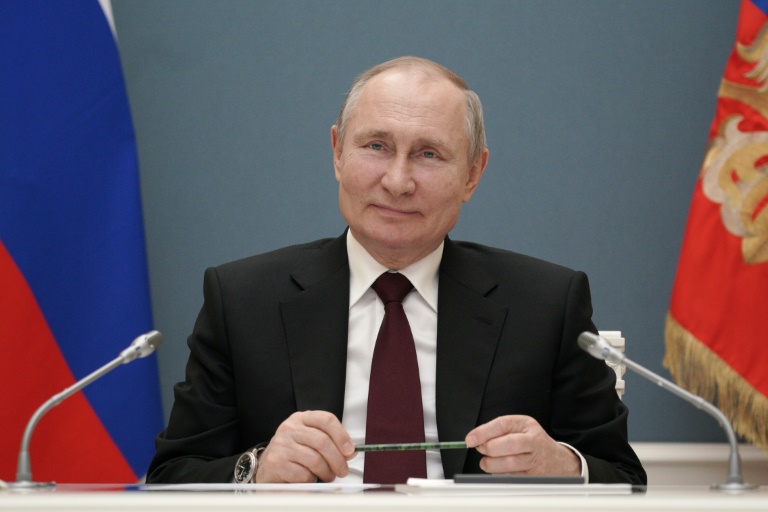 Putin is under pressure both at home and abroad.

Putin is unlikely to mention the Navalny case - he refuses to say his chief critic's name and the Kremlin continues to dismiss him as an ordinary prisoner.

But he is almost certain to touch on other sources of contention with the West, especially over Ukraine.

A Russian troop build-up on the border with Ukraine - where Kiev's forces have been battling pro-Russia separatists since 2014 - has sparked widespread alarm and warnings from NATO.

Ties with the West have also been hit by a series of spy scandals.

Washington last week announced sanctions and the expulsion of 10 Russian diplomats in retaliation for what the White House says is the Kremlin's US election interference, a massive cyber attack and other hostile activity. Russia has vowed to respond in kind. Alliance of Doctors union's leader Anastasia Vasilyeva and her colleagues wait next to the gate of the IK-3 penal colony where jailed Kremlin critic Alexei Navalny was reportedly transferred in the city of Vladimir.

As tensions peaked last week, US President Joe Biden spoke to Putin by phone, inviting him to hold a summit in a third country. The Kremlin has said it is considering the offer.

During his speech last year, Putin set out a series of constitutional reforms that were eventually approved in a referendum and reset presidential terms so he could run twice more after the end of his current six-year term.

He has said this year's address will focus on efforts to relaunch the Russian economy after the coronavirus pandemic and to turn around a decline in Russians' spending power.

"We need maximum results in economic development, support for businesses and support for the people," the Kremlin quoted Putin as saying during a meeting on drafting his address.

Concrete economic improvements will be crucial for Putin going into September's elections.

While the president himself remains widely popular, his United Russia party is seen as stagnant and corrupt. One poll last month by the Levada Centre predicting it would win only 21 percent of the vote.