DA slams ‘mainstream media’ for ‘lies’ about its internal struggles

The party has published an opinion piece by the IRR, an organisation which has admitted to trying to ‘interfere’ in its direction.

POLITICAL NEWS - The Democratic Alliance has printed a harshly worded column on its website titled “Seven lies about change in the DA”, lashing out at the “mainstream media” for supposed “unmistakable lies, misleading information and news manipulation”.

The opinion piece is written by CEO of the Institute of Race Relations (IRR) Frans Cronje.

It was initially presented on the DA official website with no indication of the fact that it was originally published by Rapport or that its author is from the IRR. 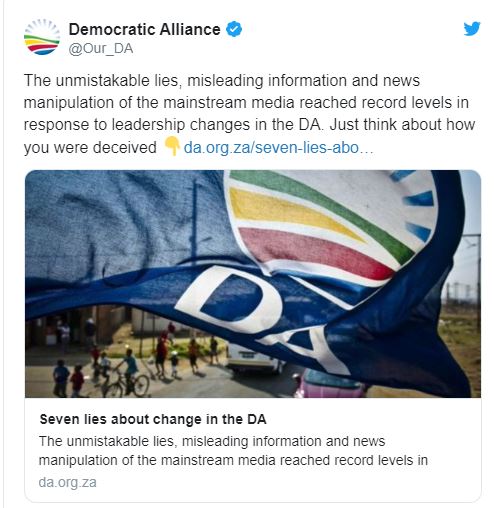 The IRR has been accused of interfering in the DA’s trajectory, through its “Save the opposition” campaign, by prominent DA members including parliamentary leader John Steenhuisen and national spokesperson Solly Malatsi.

The think tank responded to these accusations by indicating it considered its involvement in the DA’s internal processes part of its duty as a think tank, saying “it’s no secret that we try to affect politics“.

In the column, Cronje attacks the media without naming names and mentions “lies” the media has allegedly told, without attributing them to individuals. In the process, he portrays several predictions, opinions, and editorial comments made in the media as having been printed as fact.

“The first lie was that there was an ‘exodus’ of black leaders from the DA,” Cronje writes.

It is unclear where in the media an actual exodus of black leaders from the party was reported. The Citizen reported only that there were rumours of a “black exodus” following outgoing Johannesburg mayor Herman Mashaba and former DA leader Mmusi Maimane’s resignations after several prominent black leaders indicated off the record that this would be the case. Why the rumoured “exodus” didn’t come to pass is unclear.

“The second lie was that black people would only vote for a black DA leader,” Cronje continues.

It is unclear what the IRR CEO is referring to here as no sources are provided, but it is likely that, if any mainstream media publication published this claim, this was in the form of an opinion piece or comment from an analyst. The Citizen could find no evidence that any publication reported this as fact.

“The third lie was that the DA wants to lead South Africa back to apartheid. This lie is suggested in a newspaper cartoon where Maimane leaves the DA with the new South African flag draped over his shoulder, leaving a new DA emblem in the colours of the old South African flag,” Cronje wrote.

The Citizen could not find the cartoon in question and no sources were provided by Cronje.

“The fourth lie was that Maimane was very popular and that the DA made a huge mistake by letting him go,” writes Cronje.

READ MORE: IRR is ‘right wing’ and I won’t let them treat me like a ‘domestic worker’ – Maimane

His sources are once again unclear, but it is unlikely that this view was expressed in any form other than opinion pieces, which are fair comment and are not intended to be taken as hard news.

“The fifth lie was that the DA will now ‘give up’ Johannesburg and Pretoria to the ANC,” Cronje writes.

While it has been reported that there is a possibility that the DA will lose the Johannesburg metro following Mashaba’s departure, The Citizen could find no evidence of this being reported as fact, neither is it possible for the media to factually comment on events that have not yet transpired.

“The sixth lie was that the DA does not want black leaders,” Cronje writes. He may be referring to opinion pieces or comment from analysts, which, as has been clarified, are not meant to be taken as fact.

“The seventh lie was that the Institute of Race Relations (my employer) conducted a coup within the DA and took over the party. It is flattering to suggest that we have so much power and I would like to take credit for it, but that is unfortunately not the truth,” Cronje writes.

The organisation did, however, openly launch a campaign to Save the Opposition which appeared to focus only on the DA and included fundraising. The organisation subsequently admitted to attempting to “interfere” in the party’s trajectory, defending its right to do so.

The column initially appeared to have been presented as a statement from the DA, as no indication was given that it was originally published in Rapport. It credited Frans Cronje as the piece’s author only at the bottom and did not indicate it was an opinion piece.

Since questions sent by The Citizen as to why this is the case, the party changed the way the article was published on the website.

It now says beneath the headline: “Translated from a column by Frans Cronje appearing in Rapport newspaper on 10 November 2019”

How it initially ended up on the DA’s official website, with no indication of where it was originally published, no clarification that it was an opinion piece and no reference to who the author is until the end of the piece, is unclear.

“The piece is NOT a DA statement. It was originally published in Afrikaans in Rapport, we simply republished it on our website due to the relevance of the content,” said Malatsi.

Asked why the piece ended up on the DA’s website, federal council chairperson Helen Zille said: “Because it was about the DA.”

She denied the party had presented an opinion piece as a press statement.

“No, we haven’t. We have amplified a Frans Cronje column,” she said.