Biden heads for Georgia, Trump the Midwest as US election enters final week

Democratic candidate Joe Biden was campaigning in Georgia as the US election campaign entered its final week.

INTERNATIONAL POLITICS - Democrat Joe Biden was campaigning in the once reliably Republican state of Georgia on Tuesday and President Donald Trump was hopscotching across the Midwest as the US election campaign entered its final week.

Biden, 77, who is leading in the polls ahead of the November 3 vote, was to hold a socially distanced drive-in car rally in Atlanta, Georgia's largest city.

Trump, 74, defeated Hillary Clinton by five points in Georgia in 2016 but polls have him running neck-in-neck with Biden in the Peach State.

Georgia last voted for a Democrat for president nearly 30 years ago - Bill Clinton in 1992 - but the Biden campaign has high hopes of switching the state from Red to Blue and also winning the two US Senate seats up for grabs.

Trump had a hectic schedule planned for Tuesday with a campaign rally in Michigan and two events in Wisconsin, midwestern battleground states which he won by razor thin margins four years ago.

Trump was to finish the day with a campaign rally in Omaha, Nebraska, in a sign that he expects a potentially tight White House race where every Electoral College vote counts.

The Cornhusker state is a Republican bastion - Trump won there by 25 points in 2016 - but along with Maine it splits its allotment of votes in the state-by-state Electoral College, which ultimately decides who wins the White House. 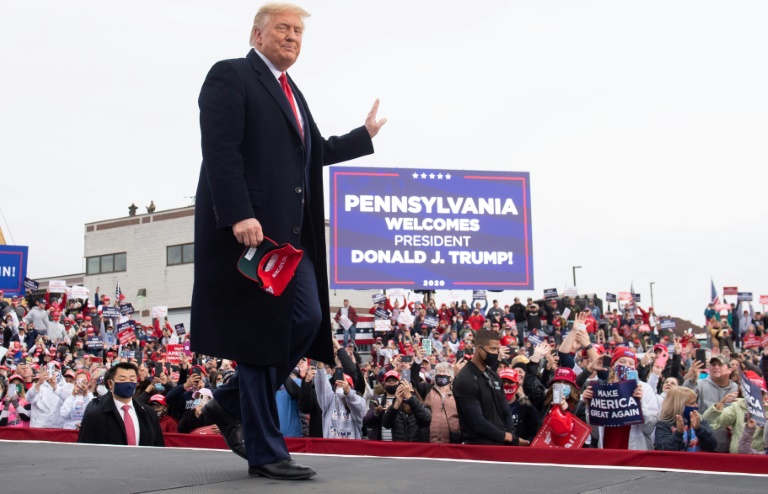 President Donald Trump heads for Michigan, Wisconsin and Nebraska with a week left in the US presidential campaign.

Republican incumbent Don Bacon is in a close race with Democrat Kara Eastman for the congressional seat in Omaha, a Democratic stronghold in the largely Republican state.

Ahead of Trump's visit to Michigan, the Biden campaign lashed out at his handling of the coronavirus pandemic which has left more than 225,000 people dead in the United States.

"President Trump's mismanagement of this pandemic has devastated Michigan," it said. "Cases are surging, hundreds of thousands are out of work, and there's no end in sight.

"Eight months into this crisis, he still has no plan to get the virus under control, no interest in listening to the scientists, and no ability to lead our country through this moment," the Biden campaign said. "With one week left until the election, Michiganders can finally put an end to the chaos, failure, and division that has defined Donald Trump's presidency."

Election tracking website RealClearPolitics has Biden up 7.6 points in an average of national polls and leading Trump by nine points in Michigan.

Trump dismissed the polls in a tweet on Tuesday and accused the media of focusing on the Covid-19 pandemic to hurt his chances for reelection.

"The Real Polls are now saying that I am WINNING!" he said. 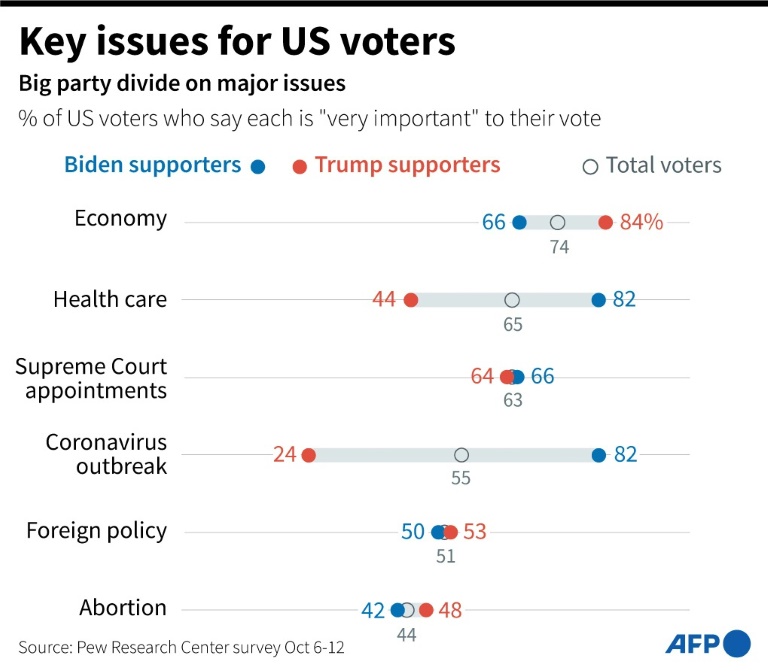 Key issues for US voters.

"Until November 4th., Fake News Media is going full on Covid, Covid, Covid. We are rounding the turn," he said.

Trump also touted the confirmation of his latest Supreme Court nominee, Amy Coney Barrett, as a landmark victory for conservatives.

"This is a momentous day for America, for the United States Constitution and for the fair and impartial rule of law," he said at the swearing-in ceremony of the 48-year-old Barrett Monday night.

The White House said meanwhile that it was closely following the situation in Philadelphia, where protests broke out overnight following the fatal police shooting of a 27-year-old Black man, who was holding a knife.

The Philadelphia shooting was the latest to spark anger in the United States, which has seen a wave of protests for racial justice since the police killing of George Floyd in May in Minnesota.

Trump has focused on the unrest to bolster his claims to be the "law-and-order" candidate in his election battle against Biden.

With one week to go until Election Day, 66 million Americans - wary of the health dangers of crowded polling booths, and energized by a race framed as critical to the future of the country - have already voted.

The number of early ballots far surpasses the total of 58 million pre-election votes in 2016.