Why land reform fails – but not in the WC

No support from government has been failing a struggling farmer from Piet Retief, but those in the Western Cape are receiving backing and are thriving.

Gert Sibande district farmer Micheal Mbukeni speaks to The Citizen at his farm on the outskirts of Piet Retief in Mpumalanga, 14 February 2018, about his struggles to secure farming equipment from the government to work his land. Photo: Nigel Sibanda

NATIONAL NEWS - Lack of resources such as funding, equipment, and infrastructure have proved to be a thorn in the side of a group of farmers who, despite owning hundreds of hectares of land, have been forced to exist as subsistence farmers, living hand to mouth.

The eight families, who were beneficiaries of land reform, are now at each others’ throats, while communities nearby are also feeling the pinch.

Michael Mbukeni Ntshalintshali from Piet Retief in Mpumalanga told The Citizen he had been waiting for government support since 2013, after he and his fellow farm workers acquired the farm Zendelingspost No 2019 from the previous white owner.

“We cannot do anything because we do not have the money or equipment to work the land and provide for the eight families that are working on the farm,” said a frustrated Ntshalintshali.

The distinct feature of this approach is that the state acquires land proactively and then identifies beneficiaries who become leaseholders. In other land reform programmes, the land is acquired by the state and transferred to the beneficiaries as owners.

“When we acquired the farm in 2013, we thought that our lives were going to change for the better, but it’s been six years now and we are still waiting for the department to come and help us,” said Ntshalintshali.

He said the delay in assistance from the department had caused infighting and divisions within the community, because there were no temporary jobs for them, unlike before.

“Everyone is looking at me now as if I am to blame for the lack of progress. We cannot afford to wait any longer because who knows what they will do? They might even kill me because they want this farm,” he said. 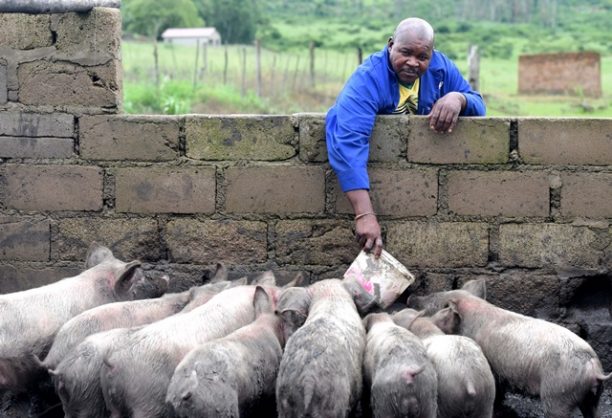 Gert Sibande district farmer Micheal Mbukeni speaks to The Citizen at his farm on the outskirts of Piet Retief in Mpumalanga, 14 February 2018. Photo: Nigel Sibanda

Meanwhile, in the Western Cape, a mixed farmer from Bredasdorp, Justice Mxokezeli, said the Western Cape department of agriculture’s help in buying livestock was a key point in the development of his business.

“I’m looking to become a big guy. I want to be competitive locally and internationally through exports,” he said.

Achmat and Wadea Brinkhuis started their farm, Chamomile, in the Philippi horticultural area 12 years ago and are similarly optimistic.

“When the department first came here, Wadea and I bought five chickens and now we’re up to 13 000,” Achmat said.

The Democratic Alliance’s (DA) Western Cape minister of economic opportunities Beverley Schafer said 72% of land reform projects supported by the Western Cape department of agriculture “were successful in the period between 2014 and 2019”.

The results from an independent evaluation of the projects indicate that the support package offered to farmers is creating a real impact in terms of business growth and their quality of life.

“What we are seeing from these results is that support is critical to a land reform project’s success,” said Schafer.

She said through the Cape Agency for Sustainable Integrated Development in Rural Areas, the province had been able to provide mentorship, training and contracts, as well as access to grant funding, equipment and infrastructure.

Schafer said the study evaluated 105 of the projects which receive support from the department and found that 16% of farms were classified as “highly successful”, while 56% were classified as “succeeding”, 24% were “challenged” and only 4% of the total had failed.