Merriam Pholaba standing next to want she once called her home. Her seven room home was destroyed during the heavy rains. She has now built a two room shack to share with her children with the roof sinks that are remaining.

NATIONAL NEWS - A severe night-time storm that swept across Pretoria on Tuesday left widespread damage in its wake for the community of New Eersterus, blowing off roofs and leaving some homes uninhabitable.

Families in the Hammanskraal area were left to pick up the pieces after the violent storm had passed.

At least 100 houses were affected – with 31 being seriously damaged – and residents lost their belongings.

Resident Merriam Pholoba said she was asleep in her home when she suddenly felt rain drops on her face.

“When I looked up, I saw that the roof sheets were all gone. Shocked, I took my child and we hid under the bed for cover until the storm passed.

“The rain had destroyed the main four-room house, the additional two rooms outside and a toilet. We now have to ask neighbours to use their bathroom as ours was destroyed.”

Pholoba said the family had to build a shack using roof sheets not destroyed by the storm.

“I have lost everything. I’m unemployed and I don’t know what I will do to rebuild my home. We had to build a two-room shack to only have a place to sleep. I have to share it with my three children, one of whom is pregnant.”

Louisa Nkoana’s five-room house was also destroyed and she also had to build an emergency one-room shelter for her family.

“This rain ruined everything. It washed away my important documents including my ID, my furniture, children’s school books and food. My five-room house is gone. The pain is unbearable.” 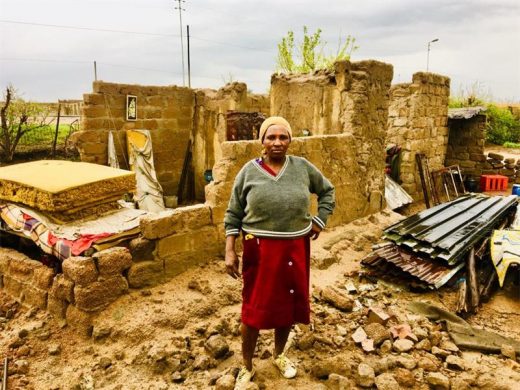 Merriam Pholoba standing next to what she once called her home.
Photo: Lunga Mzangwe

Junior Mogale, who is pregnant, said the storm had destroyed all her possessions.

She decided to demolish part of her damaged house as she feared that it would collapse on her while she was sleeping.

“Everything is ruined. I have nothing. I am alone and pregnant. I’m standing in the rain, trying to cook because I need to eat. When this happened, I cried until I stopped. This house was left for me by my late mother. I’m unemployed, how will I rebuild it?”

“We went there on Friday to move them, but they refused because some of them own livestock and they were worried it would be lost. Regarding the food parcels that were promised to the families, I will follow up with social development.”

Maluleka said the residents’ homes were located along a flood line.

“They need to be relocated to serviced stands,” he said. He, however, could not confirm when such a move would happen.

“We need to move them to where there is water, electricity and sewerage. Land has been identified for the move but then we found out that it also has a flooding problem.”

“We wanted to arrange alternative accommodation for those who were affected, but none of them wanted to be accommodated at alternative venues. That is the least we could do while the matter is being looked at by relevant departments,” Mabaso said.