In their memorandum, Move One Million asked that government ‘hold accountable all those who have denied any South African any of the rights listed in sections 9 through 37 in the Bill of Rights, regardless of their influence or position of power.’

Gauteng demonstrators from the Move One Million movement at Constitution Hill to hand over a memorandum demanding accountability from government. Photo: Twitter/@GhostHerbert

NATIONAL NEWS - Crowds in at least different provinces have gathered for peaceful protests arranged for Saturday by “Move One Million”, a movement that has attracted people from different walks of life to vent their frustrations and dissatisfaction with government.

Since the movement was launched on 20 July 2020, more than 2.6 million South Africans have joined.

Four scheduled events are taking place on Saturday, with Cape Town and Gauteng’s demonstrations starting at 11am.

There are also planned demonstrations in Durban and Pietermaritzburg.

Reports indicate that demonstrations were also planned in Kimberley in the Northern Cape, for a memorandum to be handed over to mayor Patrick Mabilo.

“Know that today, South Africans across the globe stand in unity to let the world know that our leadership has failed us. We stand today for the acknowledgement of your responsibility to the people of this country.

“We stand united today for the defence and protection of the rights of all South Africans,” the memorandum read.

In the memorandum, Move One Million asked that government “hold accountable all those who have denied any South African any of the rights listed in sections 9 through 37 in the Bill of Rights, regardless of their influence or position of power.”

The group also said the rights of South Africans have been overlooked or “simply ignored” by certain people in positions of power for “the last two and a half decades.”

“For too long, we have suffered at the hands of those who consider themselves above the law.” 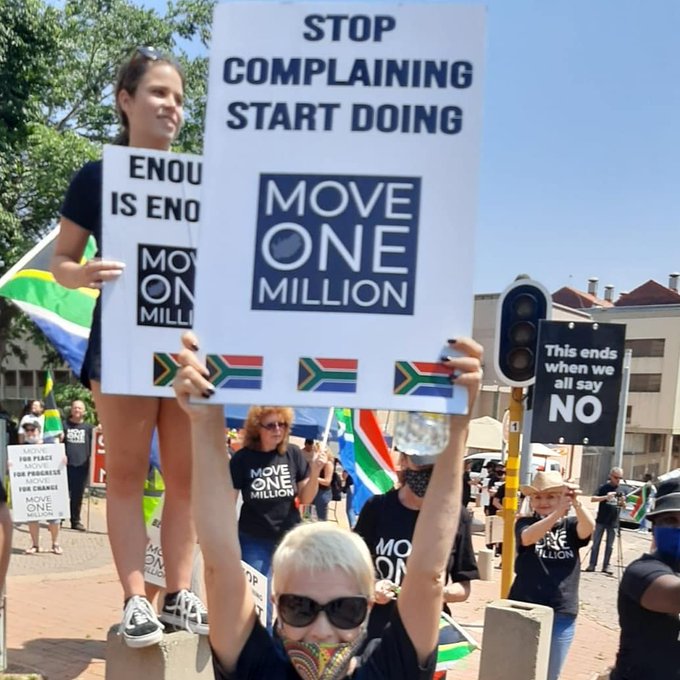 It said the only way in which the rights of South Africans can be protected is through the actions of the Constitutional Court.

During the demonstrations, people took turns expressing their fears and frustrations, regarding significant problems still plaguing the country, including gender-based violence and femicide, the safety of children, unemployment, corruption and poverty.

Demonstrators told eNCA they are also demanding “direct elections”, in order to shift power from one party to many, and to try and arm citizens with some say in governmental affairs.