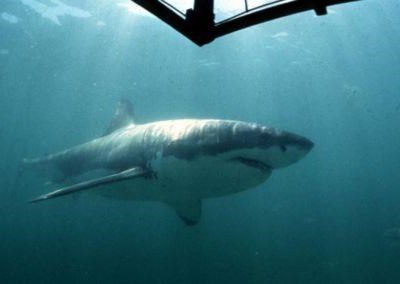 "If this system works, it will keep sharks and bathers at a safe distance from each other without harming either humans or sharks," the board's CEO Mthokozisi Radebe said on Monday.

Testing will be carried out at Glencairn beach in Cape Town.

Radebe said the cable would emit a low frequency, pulsed electronic signal, which was known to repel great white sharks.

"If successful, it will provide the basis to develop a barrier system that can protect bathers without killing or harming sharks or any other marine animals.

"It is important to note that this is an experiment, and at this time [during the testing] the cable offers no protection against shark attacks to bathers or other water users."

The board had received a permit from the department of environmental affairs to test the 100m long cable, and it would be installed parallel to the shore in early October.

It will be activated on certain days, during daylight hours, from November until March next year.

"The KZNSB has long been investigating the use of new technology to provide alternatives to its current programme of shark nets and drumlines deployed along the KwaZulu-Natal coast," said Radebe.

"The organisation has a legal duty both to protect bathers against shark attacks in the province and to minimise the environmental impact of its operations."

The cable would be monitored during the testing period.

"This will be done by means of a video camera high above the beach and by shark spotters, who will track the movements of any sharks sighted near the cable," said Radebe.

"The video footage and the records kept by the shark spotters will be analysed by KZNSB scientists to see how the signal emitted by the cable affects white sharks."

In 2012, the Institute for Maritime Technology (IMT) in Simon's Town was contracted to design and build a demonstrator cable. The engineering and technical team first built a short cable that was tested for sea-worthiness.

After a medical evaluation showed the electronic pulse emitted was within "conservative" safety limits, a full-length demonstrator cable was constructed.

"The system is now ready to be tested in open water," said Radebe,

The experimental testing is supported by the department, SA National Parks, the City of Cape Town and SharkSpotters.

According to IMT, the system consists of a main cable fixed to the sea floor, with vertical parts called "risers" supporting the electrodes fitted on either side of the cable. The semi-rigid risers are kept upright by small buoys.

Radebe said the testing would not affect recreational activities at the beach.