Fishing has been nothing short of excellent these past few weeks, and this cold snap has forced locals to consider wearing a jersey.

NATIONAL NEWS - Fishing has been nothing short of fantastic over the past few weeks.

The Sardine Run has been excellent, with the silver fish in the Durban area at the time of writing. Whether or not the South Coast will see more of them remains to be seen.

A snap of very cold weather might do the trick – you know, the kind where locals are forced to wear a jersey.

Ewalt Aylward landed a monster grey shark off Pennington, using eight sardines tied together. It weighed in at 365kg, and was released after the photo was taken.

One of the highlights of the week was a 31kg dusty cob (salmon) caught by Reshal Dasruth of Albersville on paddle-tail at the Sandspit in Port Shepstone on Tuesday night this week.

He said it measured 143cm and took him about 20 minutes to land. The fish came in at around midnight, so he apologised for the poor quality of the photograph!

Meanwhile, the main news is that the shad have been, to put it mildly, going ballistic. Reports are in of shad being caught everywhere, including Margate pier, Orange Rocks, The Block and Stiebel Rocks. 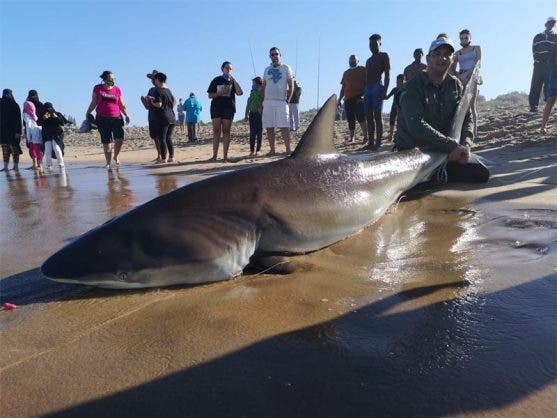 One fisherman said he’d never seen them so hungry.

“It looks like no matter what you put in the water, they will eat it,” he said.

Anglers are still catching bronze bream and rock cod were bagged at tidal pools in various places over the weekend.

There are also reports of anglers getting pulls from the big sharks on drone baits, especially at places like Stiebel Rocks and off the points. There have also, predictably, been a few bust-ups.

The increased Sardine Run activity has brought with it a spike in other marine animal activity. Dr Ryan Daly of the Oceanographic Research Institute said he had noticed interesting behaviour by spinner sharks in the area.

“Diving this past weekend, there were so many spinner sharks inshore,” said Daly. “It’s interesting to see because we don’t often get the big, mature spinner sharks inshore. But, with the Sardine Run and this year’s volume of fish, we’re seeing more of them inshore than usual. They’ve been joined by the dusky sharks and black-tip sharks, which are usually found near Aliwal Shoal.” Reshal Dasruth with the 31kg dusty cob caught at the Sandspit in Port Shepstone this week.

CEO of Ugu South Coast Tourism Phelisa Mangcu said the ocean had been an incredible source of food security during such a challenging time: “We have experienced a bumper Sardine Run this year, the likes of which hasn’t been seen on the KZN South Coast for many years. We are so grateful that, during a time when people are facing financial difficulties and food scarcity, the ocean has truly delivered to our local communities and families.”

She said that, aside from the commercial seine netting, recreational anglers were enjoying some of the best fishing at the many spots along the gorgeous coastline: “Our local fishermen welcomed the announcement that recreational fishing is allowed in Advanced Level 3, with permits.

“Anglers have certainly been making the most of this new regulation. We are also pleased to see that they are practising the required health-and-safety protocols, including wearing of masks, regular hand sanitising and social distancing.”