The opposition party wants to make a point about the inclusion of allegedly corrupt politicians on the ruling party’s list.

The DA’s premier candidate, former Tshwane mayor Solly Msimanga, led a group to Luthuli House, saying the ANC leadership belonged in “prison, not parliament” and left a pile of orange prison jumpsuits which they said were for ANC leadership, in case their point was not sufficiently clear.

Msimanga called on action to be taken against allegedly corrupt members of the ANC, saying his party would “not keep silent when our coffers are being looted”.

The ANC’s list, which was publicised last month, has received criticism, with calls for those implicated in corruption to step aside coming from both members of the opposition and politicians within the ANC.

The party officially made the decision to allow those implicated in corruption to remain on the list on the grounds that they are innocent until proven guilty, but others within the ANC are believed to oppose this and have requested the members to step aside.

Party secretary-general Ace Magashule is one of those who has defended the list, saying only those who have been found guilty in a court of law should be excluded from the list.

However, it has been pointed out that some on the list have had damning rulings made against them in courts of law. Gigaba, for example, was found guilty of lying under oath in a case relating to aviation company Fireblade, owned by the Oppenheimer family, which had wanted to open a private international terminal at OR Tambo International Airport.

The Constitutional Court also ruled that the National Prosecuting Authority (NPA) should consider whether Dlamini should be prosecuted for lying under oath during her testimony into the inquiry of the social grants crisis led by Judge Bernard Ngoepe.

“We do not represent ourselves. We are not born ministers but merely given an opportunity to serve,” said Dlamini on the controversy following her inclusion.

“The list is a reflection of an expression of ANC members at grassroots,” she added. 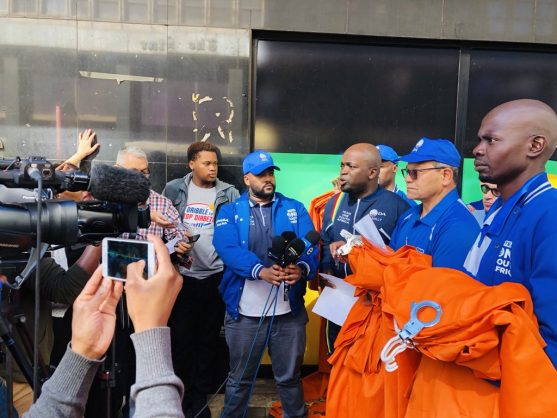 The DA leaves orange, prison jumpsuits outside ANC headquarters Luthuli House as a statement against the inclusion of politicians accused of corruption on the ANC elections list.