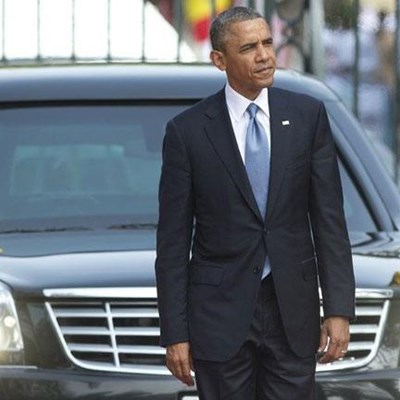 Barack Obama
NATIONAL NEWS - The memorial service for former president Nelson Mandela began without US president Barack Obama and his wife at the FNB stadium in Soweto on Tuesday.

The service began about 40 minutes late and proceeded through a welcome by ANC deputy president Cyril Ramaphosa and party chair Baleka Mbete, the singing of the national anthem, interfaith prayers, and the start of a speech by Mandela's friend Andrew Mlangeni.

Although secret service agents were at one of the entrances, Obama was nowhere in sight by 12.40pm.

The Associated Press reported around 7.30am that Obama's aircraft landed at Waterkloof Air Base in Pretoria after a 16-hour trip from Washington DC.

Obama is scheduled to deliver a 20-minute speech during the memorial service.