“We convey our condolences to the loved ones of the departed and thank the health workers that treated the deceased,” the minister added.

Meanwhile a total of 7,043,680 tests have been completed with 76,202 new tests conducted since the last report. 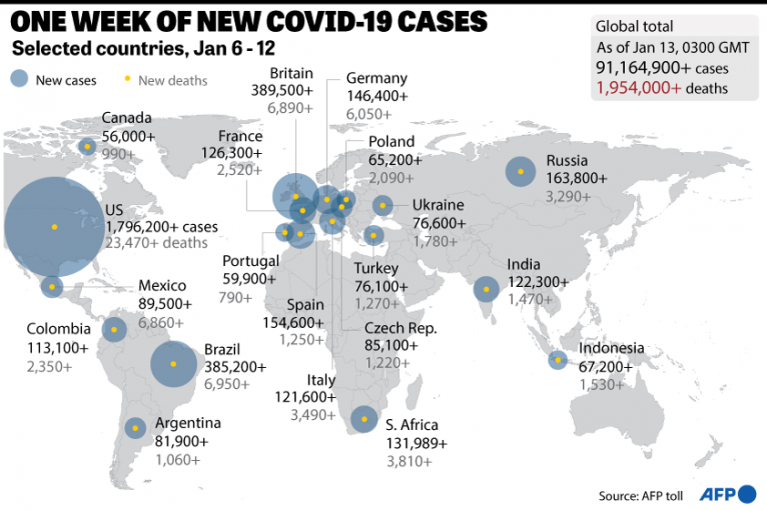 Deadliest day in US
The death toll in the United States hits a new daily record of nearly 4,500, the first time it has ever topped 4,000.

Highest infection rate
Ireland’s infection rate is now the highest in the world with 1,288 cases per million people as the government demands all travellers test negative within 72 hours of arrival.

Jokowi jab
Indonesian President Joko Widodo – who is known as Jokowi – receives the country’s first jab live on television as the nation of nearly 270 million kicks off a mass vaccination drive.

Japan emergency expands
Japan is set to expand a state of emergency in greater Tokyo to seven more regions including the major cities of Osaka and Kyoto.

Tunisia also
Tunisia announces a four-day lockdown and extended curfew to coincide with the 10th anniversary of the toppling of dictator Zine El Abidine Ben Ali.

Chinese province restricted
Heilongjiang province — home to the sealed-off city of Suihua and with a population of 37.5 million people – tells residents not to leave te region unless absolutely necessary and to cancel gatherings.

Lebanon aid
The World Bank approves a $246-million aid package to help 786,000 vulnerable Lebanese reeling under the pandemic and the country’s worst economic crisis in decades.

Test to travel
Air passengers bound for the US will be required to test negative within three days before their arrival as of January 26.

Korea sect leader cleared
The leader of a secretive church that accounted for more than half of South Korea’s cases early in the pandemic is cleared of charges of hindering the government’s virus prevention efforts.

Mask arrests
The South African government says police have arrested more than 7,000 people caught without face masks in public since the end of December.

Nearly 2 million dead
The pandemic has killed more than 1,963,557 million people worldwide, according to a tally compiled by AFP at 1100 GMT using official sources and information from the WHO.

The number of deaths globally is broadly under-estimated. The toll is calculated from daily figures published by national health authorities and does not include later revisions by statistics agencies.