There has been one additional death, taking the total to 87.

NATIONAL NEWS - In a statement on Sunday, Health Minister Zweli Mkhize said the total number of confirmed Covid-19 cases in South Africa had risen to 4 546.

The provincial breakdown was as follows:

There was only one more Covid-19-related death, in the Western Cape, which increased the total number of deaths to 87. He conveyed condolences to the family and appreciated the frontline workers who treated this patient. 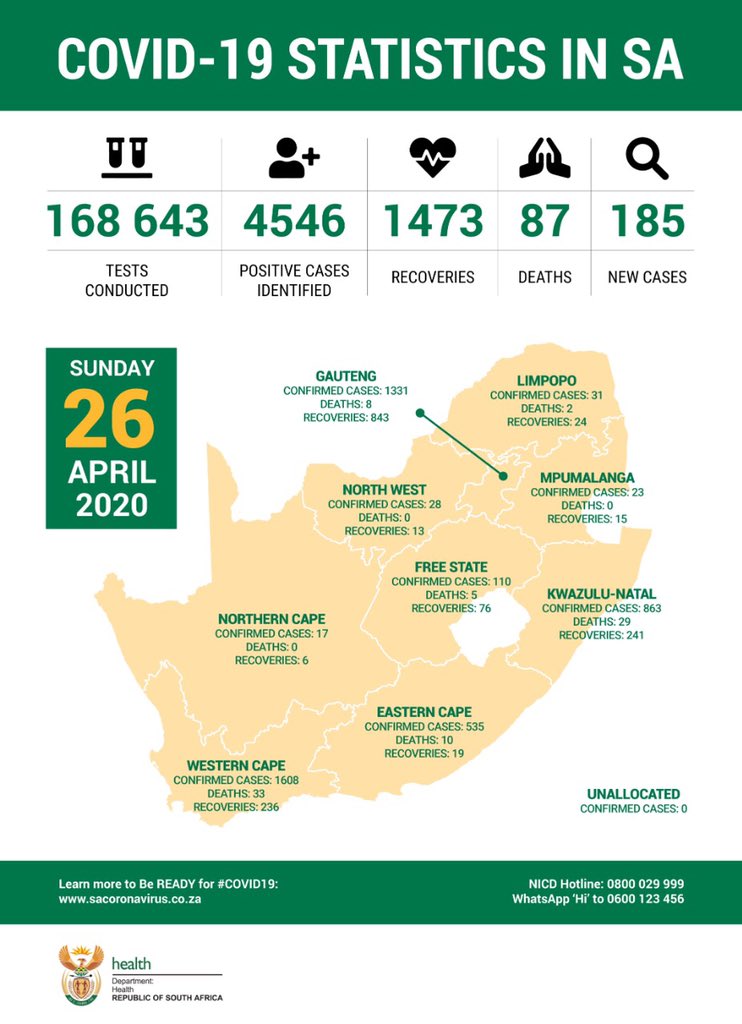 Cuban medical brigade
“We are pleased to announce that in the early hours of tomorrow, 27 April, a delegation of 217 Cuban Medical Brigade will arrive in South Africa. This is in response to the Government of the Republic of South Africa’s request to the Government of Cuba to offer us assistance and medical personnel support comprising of infectious diseases specialists, to support South Africa in its efforts to deal with COVID-19.

“The strong social and political solidarity and support that exists between the two countries have been seen in various development programmes. As the Department of Health, we have continuously enjoyed this support through the ongoing medical training programme of South African students in Cuba.

“As Cuba did in the difficult times of apartheid, it has once again lent its hand by sending health workers who are specialised in the areas of Family Medicine, Infection Prevention Control, Case Management, Regulatory Authority, Epidemiology and Surveillance, Health Technology and Biostatistics.”

He said Cuba was known for its disaster preparedness and its consistent deployment of medical brigades for disaster relief wherever required, which continued to earn Havana goodwill worldwide.

“Some of these highly skilled health professionals were in the frontline of fighting other outbreaks in the world such as Cholera in Haiti in 2010, and Ebola in West Africa in 2013.”

Before departure from Cuba, the medical brigade had been placed in quarantine to ensure they minimised any form of exposure prior to coming to South Africa. This was despite the fact that Cuba has been one of the countries where the reported Covid-19 infection rate has remained minimal.

“As South Africa, we have taken an additional step which is in line with our lockdown regulations. This team will be put in precautionary quarantine as they await their test results. We will also use this period to fully induct them into the South African situational analysis and the various provinces they will be deployed to.”

Once this process was concluded, President Cyril Ramaphosa with other ministers would formally welcome the medical brigade to South Africa and confirm their allocation to different provinces.

“We express our sincere appreciation to the Ambassador of Cuba, HE R B Version and his team in South Africa that have greatly assisted in the coordination of this mission. We have no doubt our public health facilities will benefit from this generous and selfless gesture by our Cuban brethren.”