“The province has reached and exceeded the thousand mark on cases of Covid-19. As of [Tuesday], the province is at 1 018 cumulative cases,” she said.

Ramathuba said the five deaths were diagnosed posthumously since all of them died less than 12 hours upon arrival in different facilities.

“All these cases had comorbidities and the reasons for visiting our emergency centres were as a result of complications due to their known chronic ailments. The department conveys its deepest condolences to their families.”

Ramathuba has expressed concern over the latest workplace cluster outbreak of the virus involving SANDF members deployed in Lephalale.

She said according to records, at least 38 cases have been recorded in the camp within the last 24 hours and that all of them were still under isolation, where they were being monitored.

According to the reports, Ramathuba said the infected soldiers were from Cape Town and came to the province last week as part of the battalion that was deployed to monitor lockdown compliance.

“We have reported the matter to the minister of health and head of military health services and through their guidance we are confident that we will work together to make sure we contain the spread,” said Ramathuba.

“We call for calm among the people of Lephalale and reiterate our message that the only way we can protect ourselves from getting infected is not by discrimination or blaming others, but by hand-washing with water and soap, practicing social distance and wearing masks.

“This is the time where self-discipline is required. All those with co-morbidities must stay at home. Those who are vulnerable please self-quarantine at home. Protect yourself from getting infected because you will not survive this virus.” 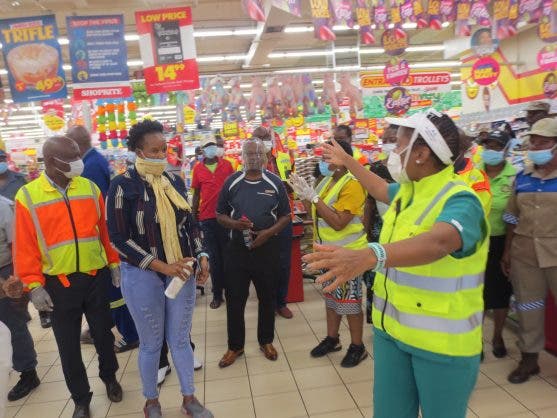 Limpopo MEC for Health in Limpopo Dr Phophi Ramathuba (right) had to tell the members of her own delegation to observe social distancing when she visited Shoprite in Louis Trichardt, 16 April 2020. Photo: Bernard Chiguvare

“We have noticed there is a total disregard of Covid-19 rules and regulations, I have then decided to revisit a sizable number of hotspots. We are saddened that by [Tuesday], the province has seen over 1 000 infections and five deaths, with over 600 active cases,” he said.

“This number continues to rise against the tide of ignorance and disregard of the present rules.”

Mathabatha commended the sterling work done by the South African Police Service in dealing with illegal soccer tournaments in villages and townships around the province.