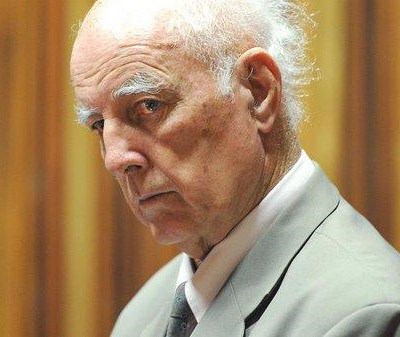 The 76-year-old former doubles champion had been convicted on two counts of rape and one of sexual assault in March last year, after abusing three girls while he was their tennis coach in the 1980s and ’90s.

The bench of three appeal court judges, who only considered the appropriateness of his sentence and not his conviction, began their judgement by commenting on how long it had taken for Hewitt to be brought to book.

“It would take the long arm of the law three decades to catch the appellant as he was only convicted in March 2015 at the age of 75 years.”

Hewitt was convicted on two counts of rape of two girls aged 12 and 13 years, and one count of indecent assault of a 17-year-old girl. The rape offences were committed in the early 1980s and the indecent assault in 1994.

He was sentenced to eight years imprisonment on each of the rape counts and two years imprisonment for indecent assault. The sentences were ordered to run concurrently.
Two years of each of the rape sentences were suspended for a period of two years on condition that he paid a sum of R100 000 to the department of justice and constitutional development to be used in its campaign against the abuse of women and children. He would thus effectively serve six years behind bars.
The appeal judges briefly sketched the background against which Hewitt had committed his crimes.

“He took his chances with the complainants, who were his tennis students, mainly during coaching sessions. He would make lewd comments to the children, peek under their skirts, rub his erect penis against them, fondle their breasts and stick his tongue in their mouths and expose his naked body to them. He wrote love letters to the second complainant whom he also forced to perform oral sex on him and proceeded to rape during a tennis tournament at the Sun City Hotel in Rustenburg,” the judgment read.

The appeal judgement then sets out the circumstances that had led to Hewitt evading justice until 2015.

“He raped the first complainant at the premises of a tennis club house in Boksburg on an afternoon scheduled for a tennis lesson. Unfortunately when she reported the incident to her mother, with whom she had a bad relationship, the latter dismissed it out of hand and that was the end of the matter.

“The second complainant had laid a charge with the police in Johannesburg. The Attorney General at the time however took the view that the case fell outside his jurisdiction as the alleged offence was committed in the former Republic of Bophuthatswana. Her lawyers also felt that the girl would not be able to withstand cross-examination, and the matter was aborted.

“The third complainant had endured molestation over a number of years until she eventually confided in her mother. No charge was laid however, as her family’s lawyer advised them that the offence would be ‘difficult to prove in court’.”

After his conviction, Hewitt’s legal team led evidence about his failing health, the devastating effect of the trial on his family’s social life, the fact that he was a first offender, and a family man married for 50 years, in an attempt to get his sentence reduced.

Despite these factors, the trial court had found that “a non-custodial sentence would not serve the interests of justice in the circumstances”.
The court however granted Hewitt leave to appeal his sentence before the Supreme Court of Appeal. In their submissions before this court, his legal team contended that the trial court “overemphasized the seriousness of the offences at the expense of the appellant’s personal circumstances having regard to his advanced age and ill health and that he ‘only vaginally penetrated the (rape) complainants once’ and has not repeated the offences.”
Read more on The Citizen.