While the TMPD gave chase and called for back-up, the vehicle that responded to the call collided head-on with the reckless driver. Alcohol bottles were found in the driver’s car, who also died on the scene.

NATIONAL NEWS - Three male officers from the Tshwane Metro Police Department (TMPD) died after a head-on collision with a suspected drunk driver in Pretoria west in the early hours of Sunday morning.

According to a statement issued by the TMPD, officers identified and attempted to stop a vehicle driving recklessly, facing oncoming traffic in the Pretoria CBD.

After officers tried to intervene, the driver sped off, and the TMPD gave chase. They then called for back-up while pursuing the suspect.

The TMPD vehicle that responded to the back-up call was then involved in a head-on collision with the suspected drunk driver.

All three officers died on the scene, as well as the reckless driver.

The driver’s female passenger was injured in the crash and transported to hospital. 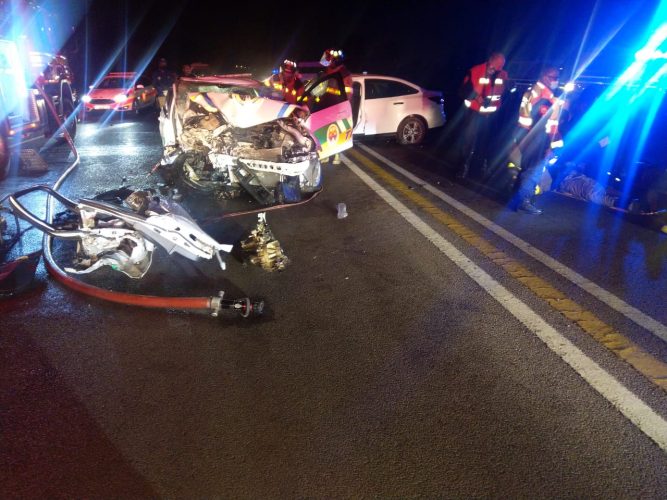 Authorities at the scene where three TMPD officers died after colliding head-on with a suspected drunk driver. Photo: Twitter/@TMPDSafety

At the scene, police discovered full and empty bottles of alcohol in the suspect’s car.

A case of culpable homicide has been opened. The identities of the officers who died will be released as soon as their families are informed.

“The Tshwane Metro Police Department is still in great shock following the sudden loss of three of its members and would like to send its sincere condolences to their families and colleagues.”

Updates to follow as more information is made available.