Fresh from unveiling the all-new Santro last month, a model which will reportedly head to South Africa as the revived Atos next year, Hyundai has resumed testing of the internally known QXi small SUV as indicated by a new spy video. 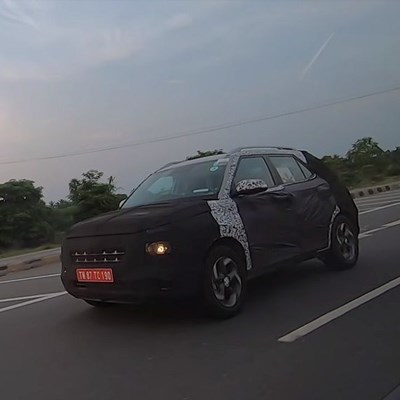 Almost concealed under thick black cladding and still sporting the black-and-white masking from its first sighting in July, the clip uploaded by indianautosblog.com shows the production version of the Carlino concept, incorrectly identified as the prototype Mahindra S201, cruising on the Salem-Coimbatore Highway that connects the cities of Salem and Kochi in Southern India, boasting a silhouette similar to the Volkswagen T-Cross and a styling derived from the Kona and Santa Fe.

Reportedly set to make use of the same platform as the Kona and its twin, the Kia Stronic, the QXi, which could reportedly adopt the Styx moniker, will rival the likes of the Ford EcoSport, Tata Nexon and the top-selling Maruti Suzuki Vitra Brezza in India, with power expected to come from the 88kW 1.0 T-GDI turbocharged petrol engine used in the Kona, the normally aspirated 1.2-litre Kappa mill powering the Grand i10 and an all-new 1.5 CRDI turbodiesel outputting 85kW.

Set to slot-in below the Creta, the QXi is anticipated to debut in the first quarter of next year, with sales starting soon after at a speculated price tag of around 650 000 rupees (R126 468). While still to be confirmed, reports are that it will also debut on local shores soon after the Atos touches down.