Too little, too late

South Africans are failing themselves when it comes to retirement planning.

As the report notes: “According to information released by Stats SA in April 2019, 49.2% of South Africa’s total adult population of 35.1 million live below the upper-bound poverty line.

LIFESTYLE NEWS - Only 6% of economically active South Africans have a thought-through plan for their retirement. A further 27% have a ‘pretty good idea’ of what they are doing. The vast majority, however, have no plan at all, or a vague plan at best.

This statistic from the 2019 10X South African Retirement Reality Report, which is put together by sampling the universe of 15.1 million economically active South Africans, illustrates the scale of the retirement problem the country is facing. And it is made even more concerning when one considers that 72% of those who said they have some sort of retirement plan still feel unsure whether they will have enough when they retire.

The current economic climate and weak market returns would contribute to this feeling of unease, but no matter how you explain it, it is clear that a significant majority of South Africans are ill-prepared for retirement. The report suggests a number of reasons for this.

Friction between the present and future selves
The first is that many people feel they simply can’t afford to save. Of those who have no retirement plan, or only a vague plan, 55% said this is because they don’t have enough money. 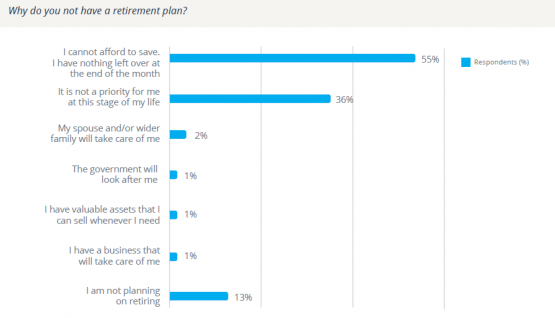 It’s also significant that a large number of respondents noted that saving is not a priority for them. Taken together, these two responses point to how poorly retirement planning is understood by South Africans generally.

“The data show that many South Africans prioritise their current lifestyle, at great expense to their future selves,” the report notes. “Most are leaving it perilously late to start applying their minds to implementing a retirement plan. It’s a terrible trade-off because while current lifestyle improvements made by not saving, or saving too little, are marginal, the resultant drop-off in retirement will be dramatic.”

Financial literacy
It also seems apparent that South African savers are not equipped with the knowledge they need to make informed decisions about saving for retirement. The graph below shows that many people have little sense of how important it is to save over the long term. 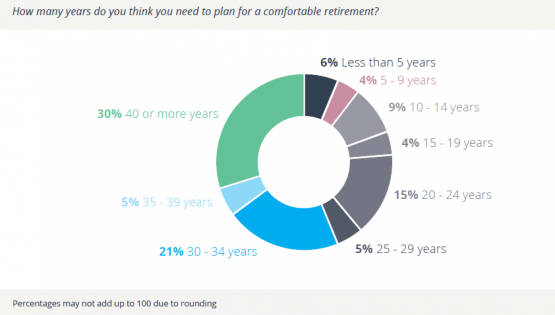 While a majority of respondents did acknowledge that saving for retirement should be over at least 30 years, 19% felt that it could be achieved in less than 15 years.

In other words, almost a fifth of South Africans hold the view that saving for retirement is a short-term endeavour.

How much does this cost?
This is compounded by the fact that most people have no sense of one of the most important impacts on their saving – how much they are paying for their retirement products. As the report notes: “The fee paid on an investment might be difficult to find (and almost impossible to understand), but you can be sure there will be a fee.”

That almost a fifth of respondents feel they are investing at no charge is not just an indication of a gap in knowledge, but an indictment on the industry.

It should not be possible for any investor to be under the impression that they are not paying for whatever product they have taken out.

This is clearly a failure both on the part of whoever advised them and whoever is providing their investment reports. Charges should be obvious, transparent and prominent. This response shows that this isn’t always the case.

So what now?
South Africa’s savings problem is not just an issue for individuals, but the country as well. As the Investec Gibs Savings Index, which was released last month, points out – a country cannot spend its way to prosperity. We have to save our way there.

For every rand saved, another rand is ‘disinvested’ through short term debt.

Correcting this problem should therefore be an imperative. The basics of investing should be taught at schools, saving should be encouraged by employers by offering compelling employee benefits, and government should prioritise reforms that will incentivise saving.

As the report notes: “According to information released by Stats SA in April 2019, 49.2% of South Africa’s total adult population of 35.1 million live below the upper-bound poverty line.

“Without action taken to tackle the retirement savings crisis in South Africa this will be pushed significantly higher.”