Off with their heels! Dior leads footwear revolution

Dior's haute couture show ended with a model wearing nothing but its new spartan sandals and a golden model of the fashion house's headquarters.

LIFESTYLE NEWS - Off with their heels! Dior had fashionistas rocking back on their stilettos Monday by taking footwear down to earth with a bump in its Paris haute couture show.

Citing a famous quote that high heels "were nothing but a modern version of Chinese foot binding", proudly feminist designer Maria Grazia Chiuri went full tilt for the liberating power of flats.

She took a saw to the tottering stiletto to create black elasticated spartan sandals that almost doubled as tights, giving them "a couture allure that also frees up movement so you can be in contact with nature," she told AFP.

On a day when women creators dominated the Paris catwalks, the Dutch designer Iris van Herpen also sheared off her heels, cantilevering the stilettos that went with her stunning ethereal creations which are unlike anything else in fashion.

The big innovations in Dior's almost entirely black autumn winter collection were the gothy thigh-length sandals, punky feathered tights and a series of embroidery dresses that echoed body art at its classiest. 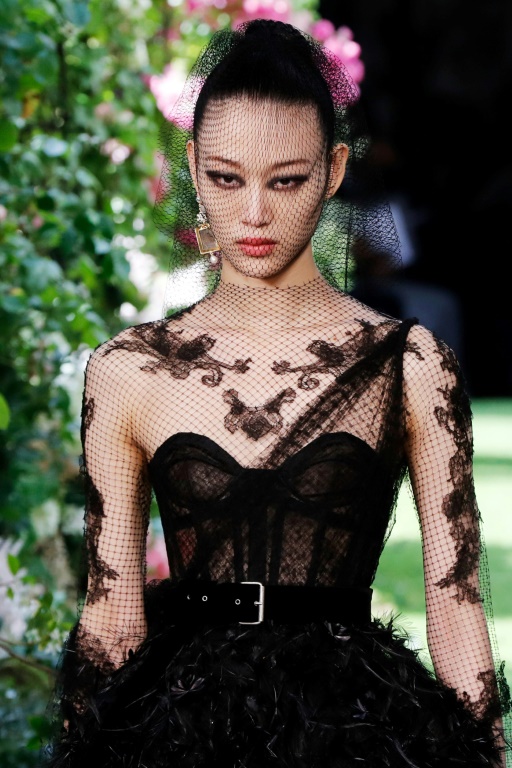 Veiled modernity: Dior's haute couture dresses featured embroidery that mimicked the effect of body art.Chiuri, the first woman ever to lead the iconic French house, said the idea was to question what we wear.

It was also from the Austrian author of "The Unfashionable Human Body" that Chiuri took her inspiration to cut the heel down to size - wearing the spartan sandals herself - although a few low-flying kitten heels did creep in.

This was perhaps the Italian's sharpest collection since she became the first woman to head the iconic French house in 2016.

Dior's headquarters, a 19th-century mansion not far from the Champs Elysees, was turned into a black-and-white surrealist landscape for the show by the British-born feminist surrealist Penny Slinger.

With "The Handmaiden's Tale" star Elisabeth Moss sharing the front row with singer Celine Dion and actress Priyanka Chopra, Chiuri upped the feminist vibe with a tribute to the caryatids, the female forms which hold up so much classical and neo-classical architecture, in a series of tunic dresses.

"They have always shouldered the weight of the world," she said.

In the final look, she hammered home the point again, with a model wearing a gilded maquette of the building as a tribute to the women who work in its studios. 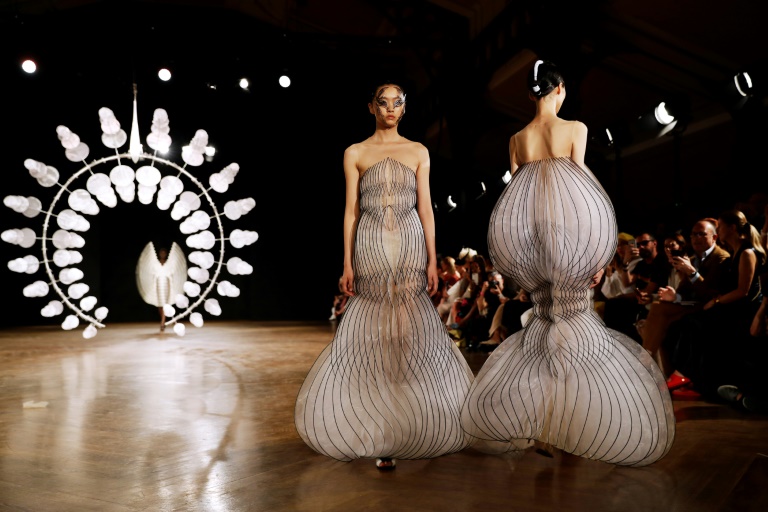 Out of this world: The iridescent brilliance of Iris van Herpen's "Epicycle" dresses at her Paris haute couture show.

Van Herpen's breathtaking collection which she called "Hypnosis" was all about lifting us into another realm of lightness.

The gravity-defying genius of her iridescent creations have often been compared to the silvery transparent creatures of the deep.

And this time she outdid herself in what she called "the hypnotic visualisation of nature's tapestry".

The show was staged around a staggering piece of moving sculpture called "Omniverse" by the American artist Anthony Howe, that echoed the shimmering anemones and squids that her high-tech gowns evoke. 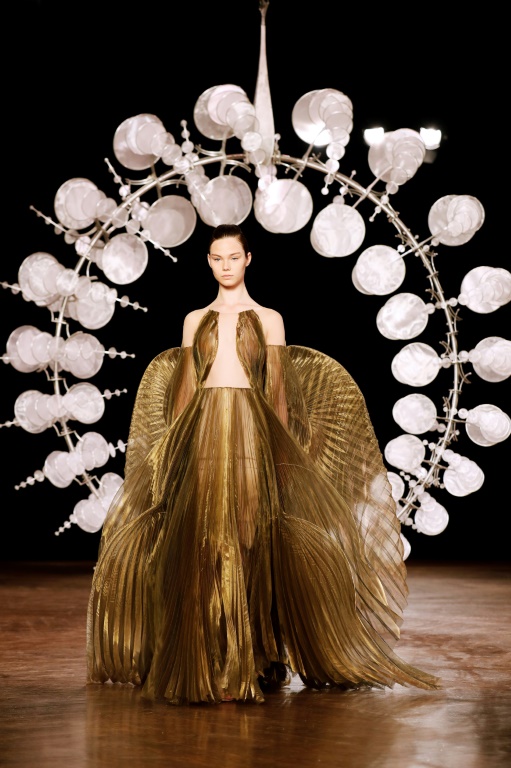 Creature from the deep: A model wearing a "Manifold" plisse dress at the Iris van Herpen Paris haute couture show, with Howe's moving sculpture in the background.

Celine Dion took her place in the front row wearing one of Van Herpen's earlier creations.

Like everyone else, the Canadian watched goggle-eyed as Van Herpen premiered a new "Hypnosis" technique developed with British neuroscientist Professor Phillip Beesley, where satin is cut into thousands of exquisite "0.8mm (0.03-inch) waves, with each interlinked and designed to move faster than the eye can follow".

The show finished with an "Infinity" dress with its own moving mechanism designed along with Howe which mimicked his installation.