LIFESTYLE NEWS - Clutching his elephant toy, Avyaan’s conversation is pretty much limited to a happy gurgle, but the nine-month-old might be about to go down in history for helping make breastfeeding in public more socially acceptable in prudish India.

Public breastfeeding carries a social stigma in much of the world - a situation that World Breastfeeding Week until August 7 hopes to change - but in highly conservative India it is particularly taboo.

The country's hundreds of millions of women are expected to dress modestly, and even a glimpse of a breast during feeding is a strict no-no, all too often inviting disgusted demands to desist and even unwanted sexual advances.

So this is what a petition brought in little Avyaan's name - by his middle-class lawyer parents Neha and Animesh Rastogi - and currently before the Delhi High Court is aimed at chipping away at.

"I was flying to Bangalore and my co-passengers were male. My son was exclusively on breast milk and it was so difficult to feed him there," Neha Rastogi, 30, told AFP at her home in Noida, a satellite city on the outskirts of Delhi.

"We want the government to set aside space in flights and at all public places because we can't feed in the open simply because breast is just seen as a sexual organ."

The signs are good that the case may make some progress, with the court demanding city authorities come up with a response at the next hearing day on August 28.

'Obscenity'
But setting aside special places is one thing. Getting wider acceptance for women to feed their babies wherever and whenever they like is a much bigger challenge.

This was what Gilu Joseph, an actress from Kerala in the south, was trying to alter when she posed with a baby - not actually her own - at her bare breast on a magazine front cover earlier this year.

The photoshoot, captioned "Mums tell Kerala: don't stare - we need to breastfeed", landed her and the publisher in court on charges of nudity, obscenity and endangering society's moral fabric.

The court dismissed the petition but Joseph found herself at the sharp end of torrents of abuse. "I don't care what others say about me. The photoshoot was part of a campaign on how to be confident while feeding in public," the 28-year-old told AFP.

"Our society is so sexualised that men connect everything with sex. They are having a problem (with my picture) because for them the body is only for sex."

Roopam Gupta, a working mother, also had a taste of how hostile society can be when she started expressing milk for her six-month-old daughter in the car coming home from work.

The driver "tried to put up covers inside the car," Gupta told AFP. "I told him he must change his mindset because I am not going to change mine."

Her place of work though is helping to fight back - the Fortis La Femme hospital, home to Delhi's first "milk bank" for mothers, set up in 2016 but still only one of a handful. Neha Rastogi, a lawyer and parent, aims to chip away at social taboos on public breastfeeding with the lawsuit pushing for better facilities.

The Amaara facility collects breast milk from donor women who pump it at home. It is then pasteurised and provided to newborns in hospital or to mothers who are unable to breastfeed.

Best start
A new report released by UNICEF and the World Health Organization Tuesday ahead of World Breastfeeding Week underscored the benefits of nursing babies from the word go. 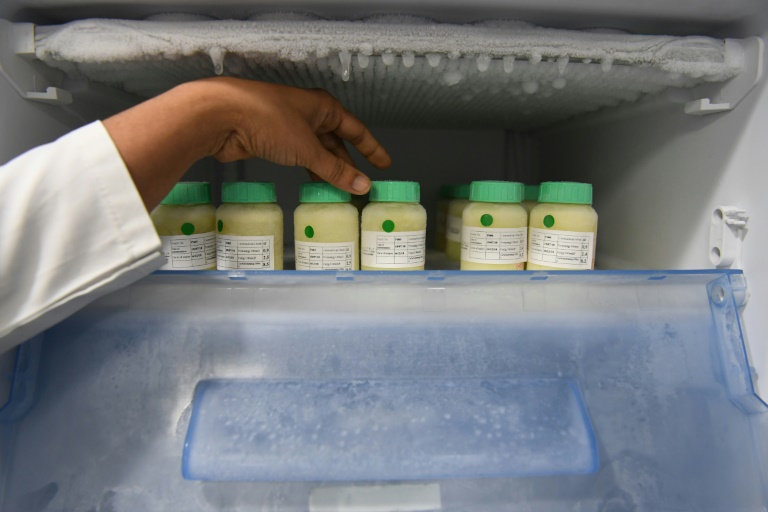 "We must urgently scale up support to mothers - be it from family members, health care workers, employers and governments, so they can give their children the start they deserve."

Breastfeeding is even more important in a developing country like 1.25-billion-strong India where many cannot afford formula milk and daily-wage earners often take their infants to work.

The restrictive atmosphere prompts many mothers to stay at home, exposing them to the risk of postnatal depression, while also acting as a brake on getting women into the workforce.

"I believe in breastfeeding and want every woman to be open about it," said Gupta.