In Syria's Maalula, fear for survival of language of Christ

George Zaarour, 62, is one of the last people in Syria to specialise in the ancient language of Aramaic, the biblical language of Jesus.

LIFESTYLE NEWS - Hunched over a thick book, George Zaarour uses a magnifying glass to decipher Aramaic script - the biblical language of Jesus that is starting to disappear from everyday use in his village.

The 62-year-old is one of the last in Syria to specialise in the ancient language, which has survived for 2,000 years in the village of Maalula - one of the world's oldest Christian settlements.

In the mountain village, Aramaic was once widely used, but today few people still speak the tongue.

"Aramaic is in danger," Zaarour said.

"If things continue like this, the language will disappear within five to 10 years."

Zaarour collects books and encyclopedias on Aramaic in his small shop, where he sells religious icons, crucifixes and even household products.

He spends his days studying and translating this ancient Semitic language, which was widespread in the Middle East at the beginning of the Christian era and whose origins date back to the 10th century BC.

Today, "80 percent of Maalula's inhabitants don't speak Aramaic, and the remaining 20 percent are over 60 years old", said the expert.

Etched out in the cliff face, and full of churches, convents and monasteries, Maalula is considered a symbol of Christian presence in the Damascus region. 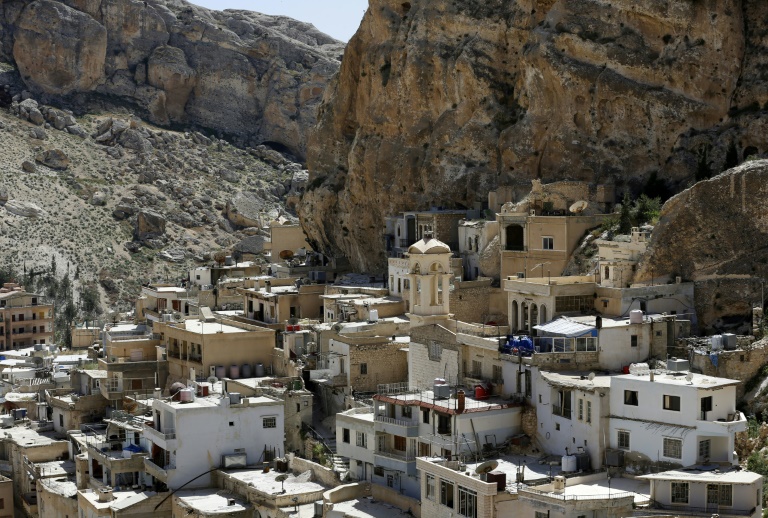 The ancient language of Aramaic has survived for 2,000 years in the Syrian village of Maalula but is starting to disappear from everyday use in the village.

Pilgrims from the entire world once visited the village to see its religious buildings, and to hear Aramaic spoken on the streets.

But the outbreak of the Syrian civil war in 2011 changed everything.

Rebels and jihadists linked to Al-Qaeda seized Maalula in late 2013, forcing most of its Christian inhabitants to flee.

Regime forces recaptured it in April 2014, seven months after the insurgents first entered the village.

But two-thirds of its inhabitants have yet to return.

Many of Maalula's residents have found refuge in and around Damascus, which is about 55 kilometres (35 miles) away, or even abroad.

"The war generation was born outside Maalula, in Damascus or in other areas, and they learned Arabic first," Zaarour said.

An author of some 30 books on the Aramaic language and its history in Maalula, Zaarour is well-known in Syrian academic circles. 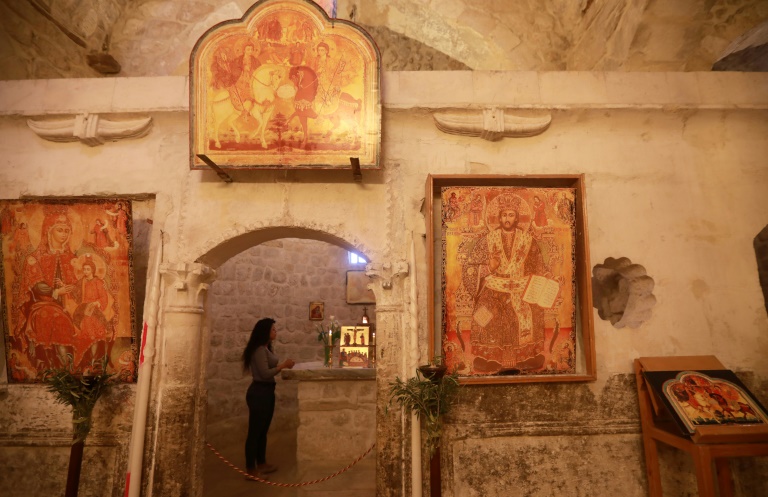 Before the war in Syria, pilgrims visited Maalula to see its religious buildings and hear Aramaic spoken on the streets.

He regularly supervises student dissertations in Damascus. In 2006, he helped set up a centre in Maalula to teach Aramaic, but it closed after war broke out.

"I think George Zaarour must be the only teacher and specialist of the Aramaic language in Syria," said the 80-year-old, leaning on his cane.

"Some young teachers are trying to learn the language, but Mr Zaarour is the only one who knows the language in depth," he added.

Preserving the language is of utmost importance, he says.

"For more than 2,000 years, we have kept the language of Christ in our hearts," he said.

"We are among the last people on earth who have the honour of mastering it." 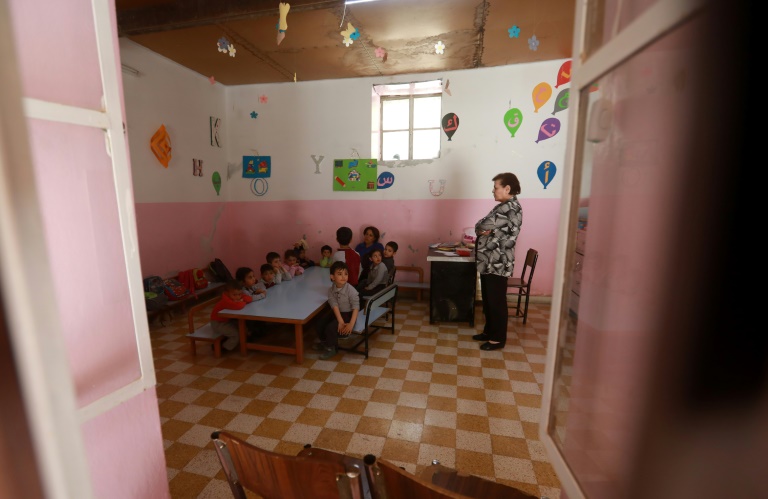 School teacher Antoinette Mokh, 64, (pictured) gives pupils an Aramaic lesson every day to help ensure the language survives but worries that when she retires there will be nobody to replace her.

But of the more than 6,000 people who lived in the village before the conflict, only 2,000 have returned, he said.

Maalula, which means "entrance" in Aramaic, is the most famous of three villages around Damascus where the language is still used.

In Syria's northeast, Syriac, which is derived from Aramaic, is also still spoken.

Other Aramaic dialects that have evolved from the original historic version of the language are also used across the Middle East today, especially in Turkey and northern Iraq, according to Jean-Baptiste Yon, an ancient language specialist.

'From father to son'

In Maalula today, the vast majority of houses remain empty, only chirping birds interrupting the calm.

The village has fared better than other parts of Syria, but it has not been spared completely.

Several churches and monasteries were looted or damaged by artillery fire, and religious icons destroyed or stolen. 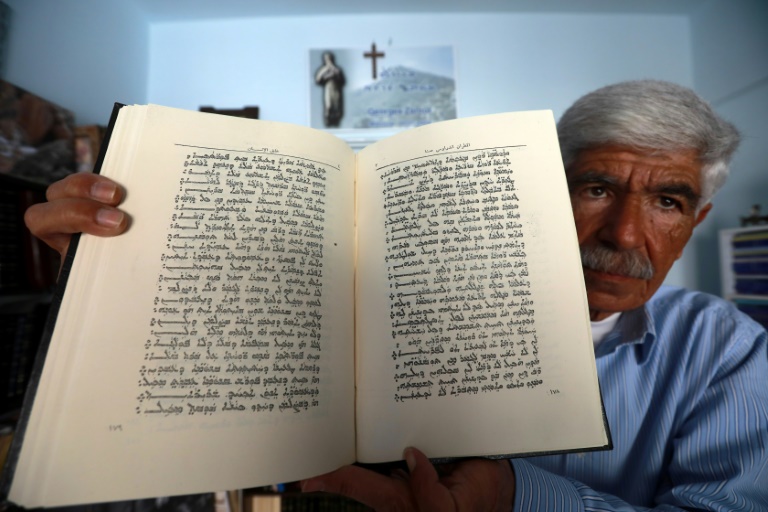 Al-Nusra jihadists kidnapped 13 nuns from the village in December 2013, only releasing them three months later.

Today, in the monastery of Saint Sergius and Bacchus, gilded candles stand once again on the chapel's white marble altar.

But in the village's only kindergarten, numbers have plummeted since the war started.

The number of students enrolled has dropped from more than 100 in 2010 to less than 30 in 2019, the administration says.

To ensure their ancient language survives, its pupils have an Aramaic class every day. 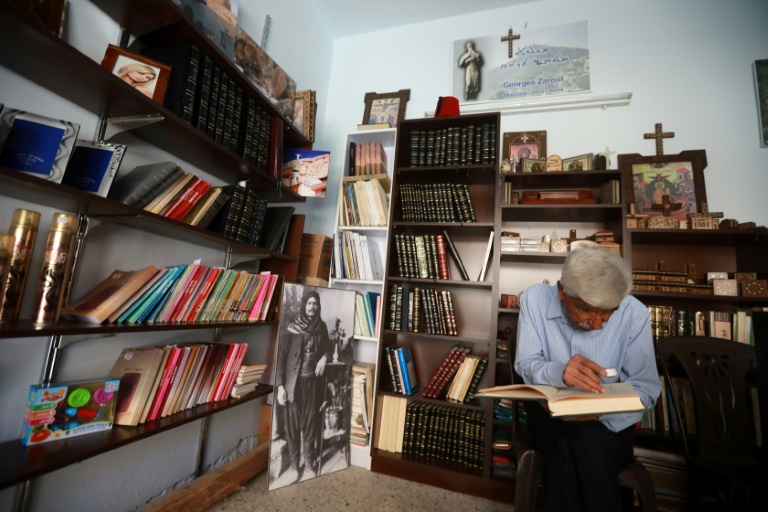 Most of Maalula's Christian inhabitants fled when the village was seized by rebels and jihadists in late 2013. So far two-thirds of inhabitants have not returned, and many found refuge in and around Damascus or abroad.

In a classroom with white and pink walls, children aged five to six sit behind wooden desks reciting Aramaic poems, under the watchful eye of their teacher, Antoinette Mokh.

"Aramaic in Maalula is inherited from generation to generation, from father to son... It's the language of the home," she said.

"But these children were born outside Maalula during the years of exile."

At age 64, she has been teaching for over a quarter of a century.

But "I cannot give up my job and retire," she said.

"There will be no replacement."