How the world's largest flying animals supported their giant necks

By studying well-preserved vertebrae specimens excavated from Morocco, a team of scientists think they have the answer: a complex assemblage of extremely light yet weight-bearing spokes inside the bones.

LIFESTYLE NEWS - Azhdarchid pterosaurs were massive flying reptiles that soared across the skies in the age of the dinosaurs, using their long bills to pick out their prey of fish and other river animals.

One of the most intriguing things about them has been the extreme length of their necks - estimated at up to three meters (10 feet), which is longer than a giraffe's and raised questions about how the animals could support its weight without snapping.

By studying well-preserved vertebrae specimens excavated from Morocco, a team of scientists think they have the answer: a complex assemblage of extremely light yet weight-bearing spokes inside the bones.

Cariad Williams, first author of a new paper that appeared in iScience, told AFP that the team had an idea that the inside of the vertebral column housed a sophisticated internal structure. 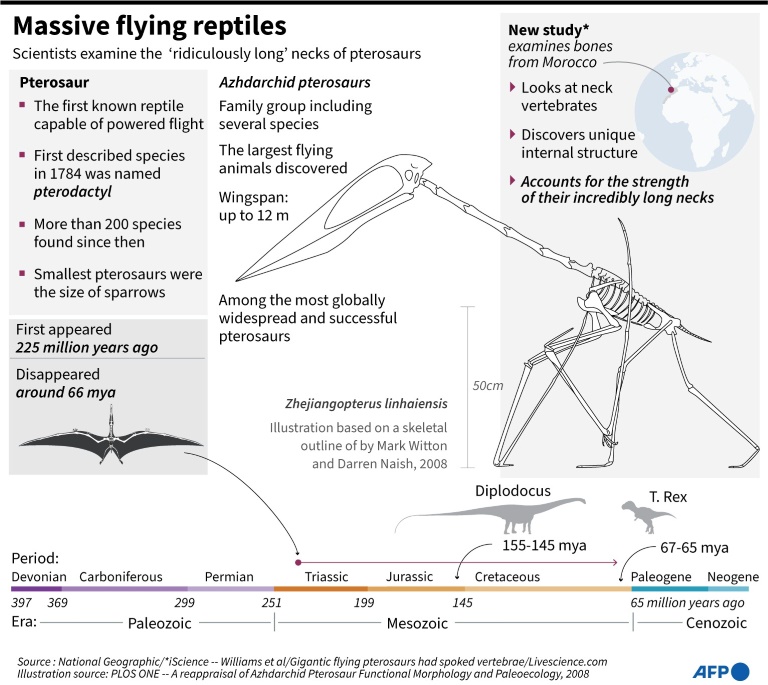 They sent the specimens off for CT scan, and "we just couldn't believe what we'd found - it is one of the most unique structures that we've ever seen," said the Phd student at the University of Illinois at Urbana-Champaign.

It has no known equivalent in the animal kingdom, either modern or extinct, and "I'm just surprised nobody found it sooner," added Williams.

The neural tube, which carries nerves through the back bone, is in the center.

It connects to the outer walls of the vertebrae via fine bones called trabeculae, that are radially arranged and cross over each other, just like the spokes of a bicycle.

These fine bones also run up and down the length of the vertebrae in a helix-like arrangement, adding further strength.

The team then collaborated with biomechanical engineers whose calculations suggested that as few as 50 of the spoke-like bones increased the amount of weight the animals could carry by 90 percent.

Co-author David Martill from the University of Portsmouth said in a statement that the discovery "resolved many concerns about the biomechanics of how these creatures were able to support massive heads - longer than 1.5 meters - on necks longer than the modern-day giraffe, all whilst retaining the ability of powered flight."

Relatively little is known about pterosaurs, and they have previously been dismissed as evolutionary dead ends, instead of being a research priority.

Yet the new findings show them to be "fantastically complex and sophisticated," and worthy of much deeper study, added Martill and the team.