LIFESTYLE NEWS - Chickens roam the orchards, cows chew the cud and pigs roll in the mud on a warm day on a Dutch farm - but the pastoral scene is not as traditional as it seems.

The farm is owned and run by a cooperative of hundreds of local consumers and aims to change habits in a low-lying country engaged in an existential fight against climate change.

Some 200 families decide what the farm will produce - and they will eventually eat - and employ a farmer to tend to the animals for meat and eggs and grow the dozen kinds of fruits and vegetables.

"The main aim of the members is to eat natural products, produced near to where they live, in a more sustainable way," said Douwe Korting, co-leader of the Boxtel cooperative, in the southern Netherlands.

"People are really starting to see that a change towards a different way of eating is essential," he added.

In return, members receive the food they want and stress the importance of knowing what they eat is local and seasonal.

With 15 cows, 20 pigs and 500 chickens, the farm covers about 20 hectares (more than 49 acres) and grows or produces what is collectively decided on by the members, who will ultimately take home their share.

A simple, green mobile home, set between the chicken hutch and the cows, serves as both kitchen and farm office. 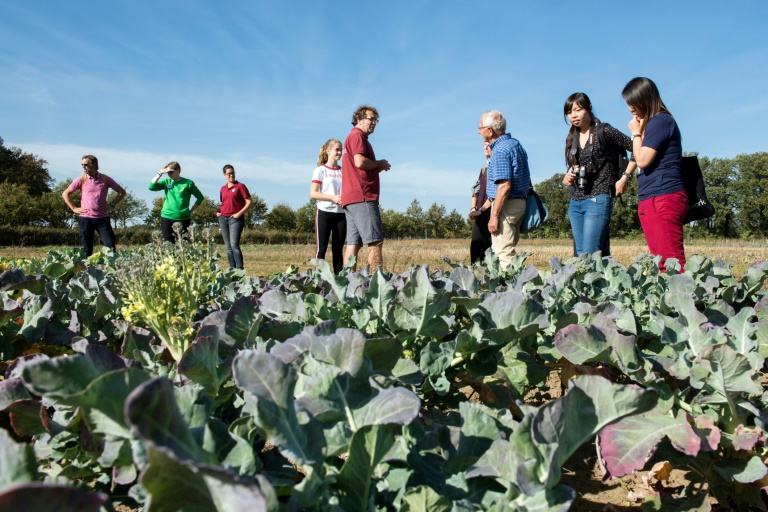 Some 200 families decide what the farm will produce -- and they will eventually eat.

Every Saturday, families come to the farm, often by bike, to fill their bags with produce or the harvest from the orchard, be it vine fruits, root vegetables, beef and chicken.

The fresh food now accounts for around 60 percent of 500 people's diet, say its leaders proudly.

Known as Herenboerderij, or People's Farming, the guiding principle is that "everything revolves around the needs and riches of nature, even while using new technologies," said its founder Geert van der Veer.

The collective farm idea is groundbreaking in the Netherlands, where intensive farming methods have made it the world's second biggest agricultural exporter after the United States, according to the CBS Dutch Central Statistics Bureau.

But, with about a quarter of the Netherlands lying below the level of the North Sea, the small country is particularly vulnerable to global warming, in which scientists say agriculture plays a key role.

A UN report warned recently that the way the world uses land to produce food has to change urgently to curb global warming, or else food security and health will be at risk.

"Something has to fundamentally change in our system of production and our way of feeding ourselves if we want to keep our feet dry," said Van der Veer.

The aim, according to the plan, is to "no longer produce as cheaply as possible, but to produce with the least loss of raw materials and with management of the soil, water and nature."

A second collective farm, in the central Netherlands, is now due to open.

"The path that farming has taken over the years has narrowed, and we are now up against the wall," he said.

"We have to go back to the farming of the 1950s, when we still knew what we were doing, while using today's technologies," he said.

At his feet, dozens of chickens help to maintain the plants that grow between the trees, fertilising the soil with their manure - although one day they, too, will be used for food.

Soon the poultry will be joined by a robot that can sense when fruit is ripe, as well as a drone that will survey the fields to support the farmer and reduce the need for manpower.

"What is certain is that farming absolutely has to change," said Korting.