Voting begins in 6 states as Biden-Sanders showdown heats up

INTERNATIONAL NEWS - Voters in Michigan and five other states headed to polls early Tuesday in the latest slate of primaries that will decide whether Joe Biden or Bernie Sanders will face President Donald Trump in November.

But Michigan, with its large delegate haul and its status as a swing state, is the day's top prize.

Sanders needs a strong showing in Michigan to remain viable as a candidate, and he and Biden have barnstormed the state in recent days in bids to broaden support and turn out the vote.

The two veteran politicians - one a centrist, the other a leftist - are locked in a duel for the Democratic nomination as all other major contenders have fallen by the wayside, many of them endorsing the surging former vice president Biden.

Sanders, a democratic socialist who was the frontrunner earlier this year and performed well in the three early voting states, is suddenly the underdog after Biden scored a decisive victory in South Carolina and then won in 10 of 14 states last week, on Super Tuesday.

Artist and designer Cecilia Covington, 61, was the first person to vote in Precinct 123 in downtown Detroit, braving the darkness and a cold drizzle as she arrived at Chrysler Elementary School well before it opened as a polling station at 7:00 am (1100 GMT). 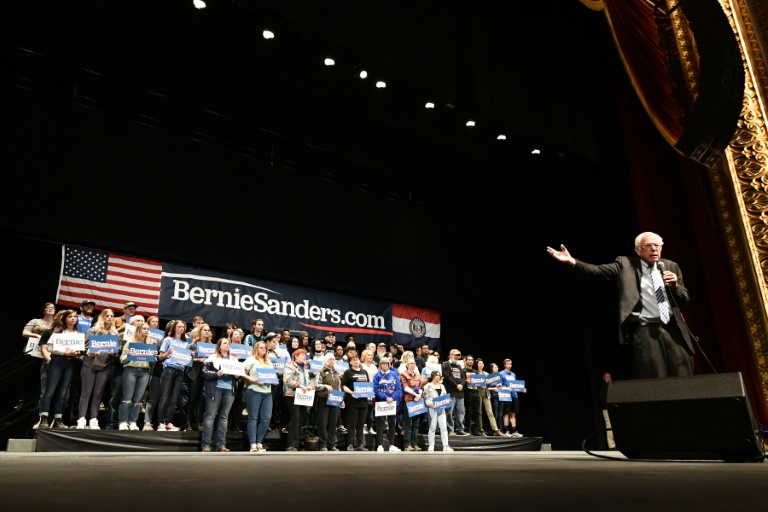 Democratic presidential hopeful US Senator Bernie Sanders speaks at a “Bernie 2020” rally at the Stifel Theater in downtown St.Louis, Missouri on 9 March.

Covington has been a Biden fan from the campaign's start.

"When he wasn't doing well in the polls I was really concerned," she admitted. "But when he won the South Carolina primary I put my confidence back in him."

"We've got to get '45' out of office," she said, referring to the current president.

Detroit attorney Conor Fitzpatrick, 30, cast his ballot in the precinct early Tuesday too, and said "by far" the most important election issue for him is who can defeat Trump.

"There are going to be one, maybe two Supreme Court seats that are up for choosing by the next president, and I think vice president Biden has the best chance to defeat Donald Trump and win states like Michigan."

Michigan had voted Democratic in the six previous presidential elections but Trump snatched it in 2016 by wooing disaffected workers, particularly in manufacturing industries like automaking.

Biden narrowly leads in the race for delegates who formally pick the party nominee, and he is ahead in polling in Michigan, Missouri and Mississippi.